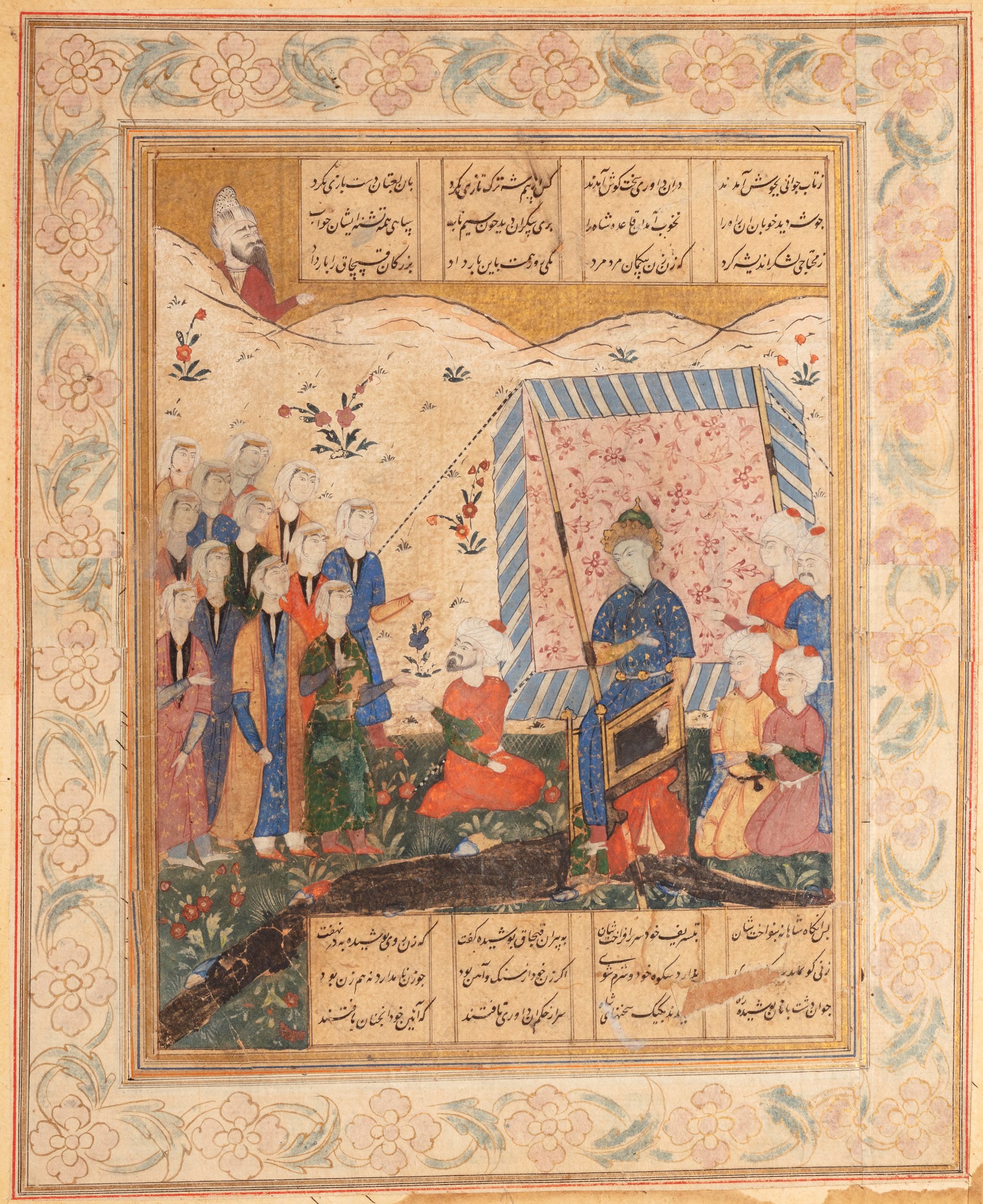 A reading of the poetry and close attention to the women depicted in the painting reveals the significance and uniqueness of this folio.

Working at the Springfield Museums and having a closer connection with historical objects has been an invaluable experience. I was particularly drawn to the Art of Islamic World Gallery at the George Walter Vincent Smith Art Museum. The collection ranges in date from the 9th to the 19th century, consisting of secular as well as sacred objects that echo the cultural traditions of the Islamic world. The collection includes excellent examples of Persian manuscripts: folios from Shahname written by Persian poet Firdausi around 1010 and Khamsa by Persian poet Nezami written in the 12th century which were among the most popular texts to be illustrated in Iran.  Amid this super collection, a folio from Khamsa drew my attention.

While most Persian illustrated manuscripts represent subjects such as heroic battle and royal hunting scenes, throne scenes, banquet scenes, and love affairs, this featured painting depicts an important women’s issue, making it very special. The folio depicts a conversation between Alexander the Great and the chief of tribe of Khifchak, produced in late 16th century in Shiraz, Iran.

At first sight, it appears to be a depiction of a traditional Persian throne scene in which the king is seated at the center of a beautiful landscape surrounded by attendants. However, a reading of the poetry and close attention to the women depicted in the painting reveals the significance and uniqueness of this folio. According to the poetry, Alexander the Great, on his way to Russia, reached the plain of Saklab (in Turkistan) and encountered the tribe of Khifchak.  There, he also saw lovely unveiled women, “more splendid than the moon and the sun,” and thought about the need of his army who were thirsty for women like water. Alexander, who was unhappy about the women appearing in public without a veil, said to the chief of Khifchak, “women who show their face to a stranger, have neither respect for themselves nor shame for their husband,” and suggested the chief mandate the women wear veils. When the chief heard the words of Alexander, he refused to obey the order. The painting depicts the moment of disobedience by showing the old man turning his head from Alexander and looking at the women.  According to the text, the wise chief responded to Alexander, stating, “if your custom is to bind up the face, our custom is to stitch up the eye; the crime is not on the face of the woman, but on the eye of the man.”

Although, as Dr. Walter Denny has stated that the painting has been partly repainted due to abrasion, the subject matter and the fact that the artist chose to depict this matter is fascinating.  In the 21st century, many women in Iran are fighting against the mandatory veil. While the women of Khifchak were very fortunate to have a non-discriminatory leader whose sagacious words are worth repeating, women of our time are suffering multiple years in prison for an indisputable right.

Aki Kabiri, born in Iran, received her MA from the University of Massachusetts Amherst in Art History and Architecture, focusing on Islamic Art. She is also interested in human rights, particularly for women who have lost their absolute rights due to injustice and all forms of discrimination.