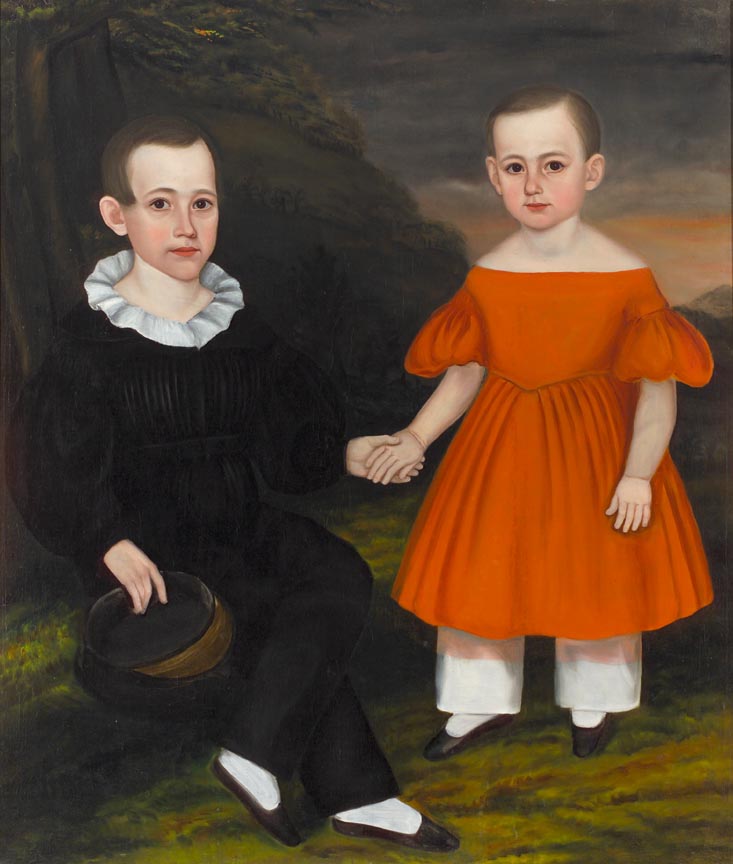 Thomas was six years old and Wilbur was two when their uncle painted this picture. Both boys were later orphaned when their mother, Lucy Gould Stock, died in 1846. (Their father Luther died in 1842.) Thomas went to live with his uncle, Joseph Whiting Stock, and Wilbur was taken in by a cousin.

Notice that Thomas wears pants, while Wilbur is wearing a dress and pantaloons. Both girls and boys dressed like Wilbur until around age five. After that, boys would wear the same style pants and jackets that their fathers did, and girls would wear dresses similar to their mother’s clothing.

Born in Springfield on January 30, 1815, Joseph Whiting Stock was the third of John and Martha Whiting Stock’s twelve children. He led a happy and active childhood until age eleven, when an upturned oxcart fell on him, leaving him paralyzed from the waist down, and unable to move from his bed. He was bedridden until age nineteen, when a local doctor designed and built a wheelchair for him. Another doctor had suggested earlier that he study art to occupy his time, and he began to take lessons from a local painter when he was seventeen. He discovered that he had talent: “I attempted my sister Eliza’s portrait and made so good a likeness as to induce my friends to encourage me by their patronage” he later wrote in his journal.

Once his wheelchair enabled him to move around, Stock began to travel to nearby towns to paint portraits at the request of people who had seen or heard about his work. His first trip was a month spent in Wilbraham in 1836. As word of his talent spread, he began to receive invitations from more distant towns. He spent two years in Warren, Rhode Island and New Bedford and later spent several years in Orange County, New York. During his travels he stayed with local families, sometimes exchanging paintings for room and board or art supplies. When business grew slow in one town, he would move on to another or return to Springfield, where he had a studio at home and another downtown.

Joseph Whiting Stock died in 1855 at the age of forty. During his twenty-three-year career he completed over nine hundred paintings, most of which are recorded in his journal. Only one hundred or so are known today but they reveal Stock’s talent, determination, and ability to overcome what for most people of his time would have been an insurmountable handicap. The Springfield Museums Association is fortunate to have a substantial selection of his larger portraits, several miniatures, his own self-portrait, and his journal. 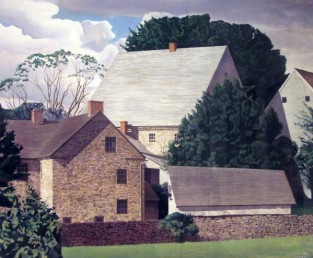 Best known for his views of industrial architecture, Sheeler was also attracted to the clean lines and simple, geometric forms… 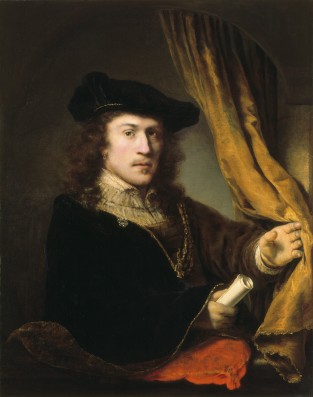 In his self-portrait, Ferdinand Bol shows his respect for his teacher Rembrandt by modeling his painting after Rembrandt's Self Portrait… 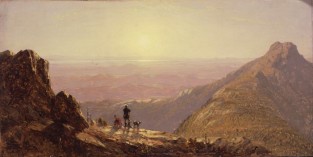