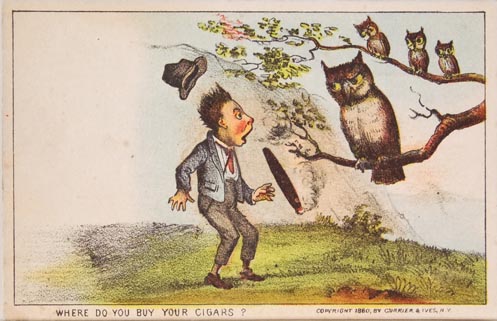 Trade Card: Man at center staring at owl and family on branches to his right.

Published by Nathaniel Currier and James Merritt Ives American, 1813-1888 and American, 1824-1895 Trade Cards Hand-colored lithographs Trade cards are early examples of the modern business card. Merchants distributed these small advertisements to their clients and prospective customers and the designs were often witty to catch the viewer’s attention. As the cards became more attractive and colorful, collecting trade cards became a popular hobby in the late 19th century. Currier & Ives produced nearly 200 different trade card designs, including twenty-one that illustrated the pleasure of cigar smoking. During the 19th century, cigar smoking was common and the cigar business was an important industry which employed many people. In New York, cigars were often made by rollers working in their own homes. It was reported in 1883, that cigars were manufactured in 127 apartment houses and employed 1,962 families and 9,924 individuals. By 1905, there were 80,000 cigar-making operations throughout the United States, most them in small family-operated shops where cigars were rolled and immediately sold. The examples of trade cards on display show designs with and without the imprint of a business or shop. Gift of Lenore B. and Sidney A. Alpert, supplemented with Museum Acquisition Funds 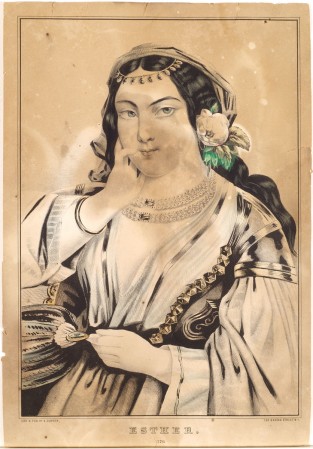 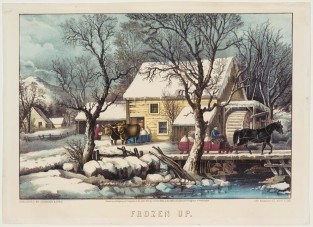 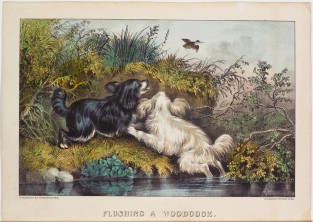