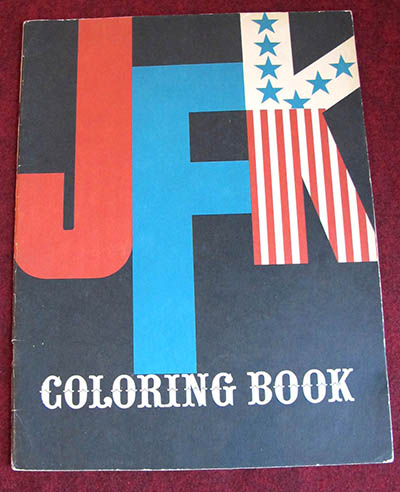 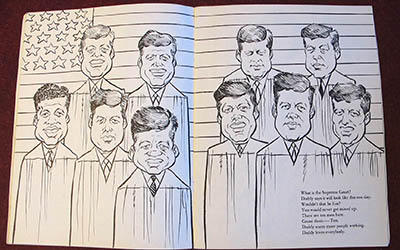 The popularity of President Kennedy and the First Family was soaring in 1962, so much so that they were the subjects of a coloring book, albeit one geared for the mature audience. Publisher Alexander A. Roman enlisted Mad Magazine’s master caricaturist Mort Drucker, comedy writer Paul Laikin, and comedian Jackie Kannon to create a book poking fun at the Kennedy family, Hollywood elites like Frank Sinatra, Kennedy Cabinet members, and even Nikita Krushchev. The coloring book, with its pages of irreverent illustrations accompanied by narrative text in the “voice” of First Daughter Caroline, spent a full fourteen weeks on the New York Times Bestseller List and was the catalyst for other satirical merchandise such as the comedic First Family record albums.  Once produced in the hundreds of thousands, this original coloring book virtually disappeared from bookshelves following Kennedy’s assassination.  It is a testament to the enduring appeal of JFK that the book was newly released in September 2014, nearly fifty-one years after his death.