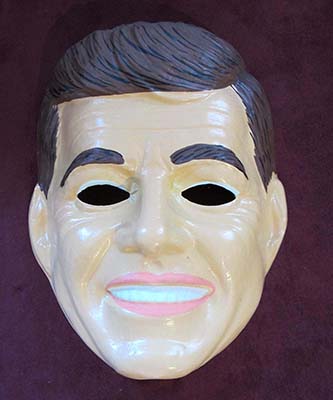 Ben Cooper Incorporated was a manufacturer of Halloween masks and costumes dating to the 1930s.  Later referred to as the “Halston of Halloween” for its lifelike masks and silkscreened costumes, the Company was one of the country’s top three manufacturers of Halloween costumes.  Characters such as Davey Crockett, Zorro, and Superman were all immortalized in costume, along with such Presidents as Richard Nixon, Ronald Reagan, and of course John F. Kennedy.  Original Ben Cooper-brand Kennedy costumes and masks are rare, as out of respect for the President the inventory was destroyed following his assassination in November 1963.