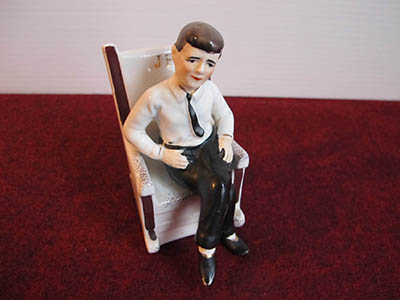 Some of the most iconic images of JFK feature him in a rocking chair made by the P&P Chair Company of North Carolina.  Suffering from terrible back pain as a result of his injury aboard PT 109 and the subsequent unsuccessful back surgeries to treat it, Kennedy’s personal physician Dr. Janet Travell prescribed a series of exercises and the use of a rocking chair.  The P&P Company’s “Carolina” rocker was so identified with the President (he owned at least a dozen) that it later became known as the “Kennedy rocker.”  It was only a matter of time until a collectible was created featuring the President in one of his rockers.