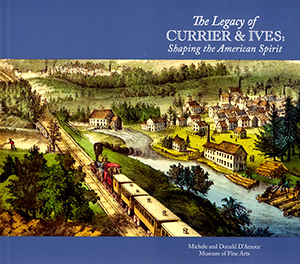 The Legacy of Currier & Ives: Shaping the American Spirit

The Legacy of Currier & Ives: Shaping the American Spirit pays tribute to the popular nineteenth-century printmakers and their role in establishing a form of mass media that was inexpensive and eagerly sought by ordinary people. The book features sixty-four lithographs reproduced in full color, which include a stunning array of visual references to an exciting period in national development.

From 1834 to 1907, Currier and Ives gave testimony to national art trends, history, and progress through popular prints that hung in homes across America. Several images featured the designs of prominent artists such as Fanny Palmer, Eastman Johnson, Arthur Fitzwilliam Tait, and George Durrie. The introductory essays, including a forward by Heather Haskell, Director of the Art Museums of the Springfield Museums, introduce readers to the firm of Currier & Ives and show how their imagery became ingrained in the national consciousness. In the seventy-two years that Currier & Ives were in business (1834–1907), they produced more than 8,000 lithographs.

The book is organized around the themes: