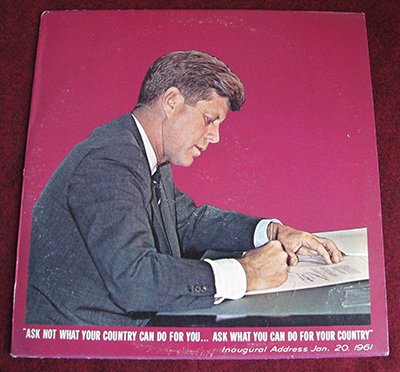 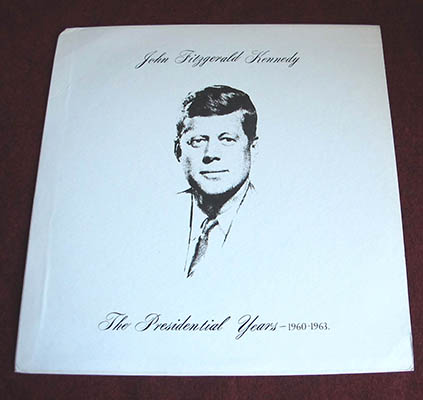 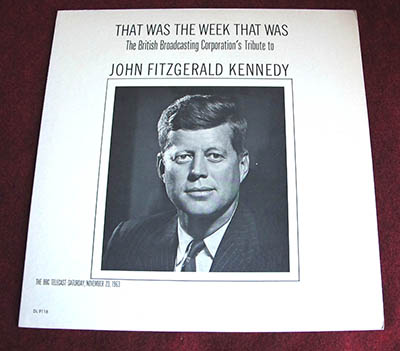 Less than two weeks following the assassination of President Kennedy, record companies were already releasing memorial LP albums paying tribute to the fallen leader. Many of these records were released by budget labels such as Pickwick and Crown, but RCA and Columbia soon followed suit with their own recordings. According to Billboard Magazine’s December 7, 1963 edition, at least three LP’s were released that week, each with its complement of Kennedy speeches and quotes accompanied by poignant words from those reacting to his death.  On December 12, 1963, John Fitzgerald Kennedy: A Memorial Album set a new record for album sales with four million copies sold in the first six days of release.  Priced at .99, all proceeds benefited the Joseph Kennedy Jr. Foundation for Mental Retardation.  Another album, John Fitzgerald Kennedy: The Presidential Years 1960-1963, sold a respectable one million copies in its first six days. While popular at the time, today these vinyl records are no longer highly collectible. Those in mint condition and still in their cellophane wrappers retail for about $15.  With Kennedy’s speeches and various broadcasts now available through the public domain, the National Archives, and YouTube, the albums are now collected mostly for their covers.  Many do as we did for the exhibit – simply framing them as a remembrance of the Camelot era.