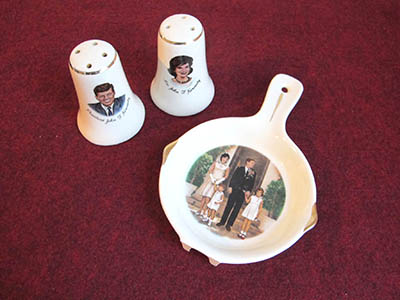 In 2002, Smithsonian.org published an article about the Ludden family of Gatlinburg, Tennessee, which had collected over 40,000 sets of salt and pepper shakers. That’s 80,000 total and enough to fill two museums!  Devotees of the hobby can be found worldwide, with collectors often beginning, innocently enough, with a garage-sale purchase.  These Kennedy-inspired shakers were at first available to the collector as an inexpensive souvenir.  Later on, as reminders of Camelot they became more collectible, especially if they retained their rubber stoppers and weren’t chipped.   If you look closely you will see that the “Jacqueline” shaker includes her married name which she much preferred over “First Lady.” She is wearing one of her favorite necklaces – “the black stone” – which following her death in 1994, sold at auction for $101,500, well above its $300 estimate.

To complement a set of salt and pepper shakers, one could purchase this spoon rest which would have come in handy after dipping into a bowl of clam chowder (JFK’s favorite).  This particular one features an image of the First Family leaving church, taken from a famous photograph by Cecil W. Stoughton, Easter Sunday, 1963.