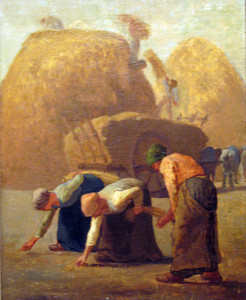 At the beginning of the 19th century French Realism, the academic style favored by the official Salon, determined the success of artists as well as public taste. But soon Realist painters used creative license to add dramatic effects to everyday subjects. While painting styles during the first half of the nineteenth century were dominated by the Neoclassical tradition, later the expressive, romantic use of color was the trend. Artists such as Eugène Delacroix and Jean-Auguste-Dominique Ingres significantly influenced a new generation of painters who wished to convey their own personal responses to the political upheavals of their time.

For two hundred years, the Academy, the School of Fine Arts, and the Paris Salon dominated the French national artistic tradition. However, by the middle of the nineteenth century the academic system had degenerated. During the 1860s and 1870s, the artists who later became known as the Impressionists, challenged traditional methods of painting concluding that the academic approach was formulaic and artificial. Their loose, open brushwork, color palette and innovative subject matter emphasized freedom from the academic style.