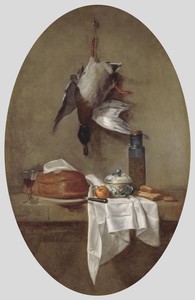 One of the most opulent galleries at the D’Amour Museum of Fine Arts, the Friedmann Gallery of French 18th-Century art embodies the Rococo time period and is characterized by grace, playfulness and light.  The word “Rococo” is a combination of the French rocaille, or shell, and the Italian barocco, or Baroque style.  French artists working in this period often used shell-like curves and natural forms of ornamentation in their paintings.

The gallery showcases successful artists such as François Boucher and Jean-Baptiste LePrince, who painted scenes of carefree aristocratic life and light-hearted romance. The still-life masterpiece, Refreshments, 1764, by Jean-Siméon Chardin was inspired by Dutch still-life painting and the canvas was highly celebrated during the artist’s lifetime.  Eighteenth century French society relished individual and intellectual freedom and portraits, such as Portrait of a Married Couple, 1733 by Jacques Dumont, capture spontaneity and the essence of individual personality.

By the mid-18th century, the Rococo was largely replaced by a Neoclassical style. Neoclassicism was closely linked with the French Revolution and revolutionaries chose the style for its association with Greek and Roman ideas.  In The Portrait of Madame Servan by an unidentified artist, the sitter wears a dress adapted from the design of a classical toga.