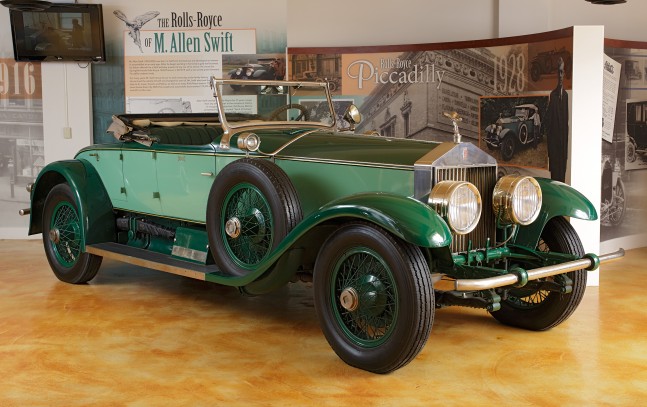 The first successful gasoline powered automobile in the country was built in Springfield, Massachusetts. Although many entrepreneurs across the country were attempting to produce a horseless carriage, the brothers Charles and Frank Duryea were the first to actually accomplish the task, test driving the auto on the streets of Springfield on September 21, 1893. The Duryea on view is an original copy built by Richard Stevens in exact accordance with the 1893 plans.

In 1902 Duryea formed a contract to produce cars with the J. Stevens Arms Company, establishing the Stevens-Duryea Company. The company produced the first six cylinder engine marketed in America. At the company’s height they were producing about 1,200 automobiles a year. The Stevens-Duryea automobile on view is a privately-owned 1911 Model AA.

Harry Knox developed an air-cooled, tiller steered, three-wheel automobile in 1899 and founded the pioneering Knox Automobile Company.  Knox also played a role in the development of motorized fire vehicles, police patrol cars, taxi cabs, trucks, and tractors. The 1899 three-wheeled Knox on view was just the third car made by the company. It was owned by Springfield resident Everett Barney, who later donated his large estate to the city of Springfield for the creation of Forest Park. Also on display is a four-wheeled 1904 Knox Touraine on loan from a private owner.

Knox broke with the Knox Auto and founded the Atlas Motor Car Company after disagreements with his financial backers. Between 1911 and 1913, the company produced five- and seven-passenger touring cars featuring a much-admired sleeve-valve engine with only five moving parts. The Atlas automobile on view is a privately owned 1910 Model H.

In 1920 British automaker Rolls-Royce sought to establish a plant in the U.S. and Springfield was selected as the site since it boasted a high number of skilled craftsmen. Over the history of the company 2,944 vehicles were produced in Springfield. The Rolls-Royce automobiles on view are a single owner, 1928 Springfield-made Phantom I donated by M. Allen Swift and a 1925 Silver Ghost Piccadilly Roadster formerly owned by S. Prestley Blake, co-founder of Friendly’s.