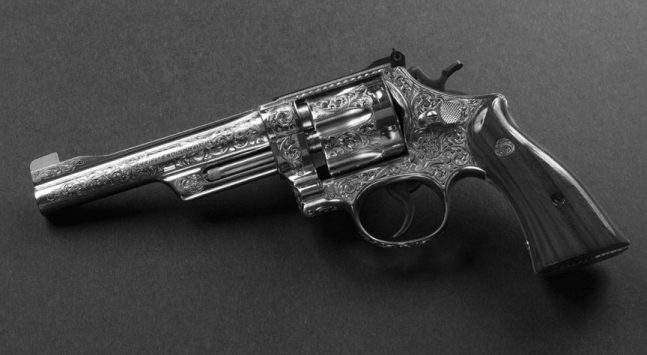 A comprehensive survey of some of the most important arms manufacturers in the history of the country. Located in a large 2,000 square foot gallery the exhibit begins with the American Revolution and brings this fascinating story up to the present day.

Twelve large colorful murals provide the visual backdrop for the display of more than 150 guns. Most of these guns are rare examples of weapons made by the United States Armory, a vast productions facility dating from the time of George Washington, and Smith & Wesson, one of the most innovative pistol manufacturers in the nation’s history.

With this in-depth exhibit the museum visitor can see just how essential the firearms industry was, both for the economic growth of the Springfield region, the center of gun making in America, but also how important innovations in the arms industry fostered technological progress during the Industrial Revolution. It’s a little known fact that the technology developed in the firearms industry led to applications and improvements in a number of other precision manufacturing fields.

Visitors to this exhibit learn about the beginning of the American gun industry in the 17th and 18th century and see several rare 18th century muskets. Following sections include a look at the early development of mass production with tools actually used at the Springfield Armory in the early years. Featured in the section on the founding of Smith & Wesson in the 1850s is an extremely rare Model 1, the very first gun made by the company. There are also a number of firearms made by Smith & Wesson during the Civil War and throughout the 19th century as the company became the premier maker of pistols in the United States. A special display of 1890s pistols engraved by Tiffany Jewelers completes this section.

As the exhibit moves into the 20th century visitors can see such examples as World War I rifles, the famous M–1 rifle used in World War II, and a highly engraved nickel-plated .357 Magnum with birds-eye maple grips which was originally displayed in the Smith & Wesson Sales Department showcase. There is also a special section on sports shooting, including target pistols used by Olympic competitors.