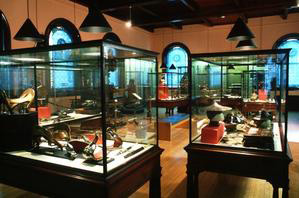 The Japanese Arms and Armor Gallery at the George Walter Vincent Smith Art Museum has sparked the imagination of countless youngsters in the past 100 years. Smith collected arms and armor from throughout the world (India, Persia, Europe, the South Pacific), but his collection of nearly 500 examples of Japanese arms and armor is the most extensive. He purchased the collection from New York dealers between 1888 and 1901. Included are blades, sword fittings, pole arms, guns, armor, arrowheads, saddles, stirrups and other horse trappings, as well as ceremonial items which were used by the samurai for whom the armor was made. Samurai swords and knives dating from early medieval Japan to the late 19th century comprise over half the collection. Some of the swords are simple — elegant blades of steel with a signature on the unpolished tang — while others are trimmed with multi-colored metal mountings, hilts wrapped in ray fish skin and bound with silk cord, and scabbards of beautifully designed lacquer, chased silver or polished wood. The collection also holds six full suits of armor including the suit of the Daimyo of Arima (16th century), signed by members of one of Japan’s most revered armorer families, the Miochin. Many of the suits are accompanied by signed lacquer boxes used for their transport and storage. In addition to arms and armor, the collection also includes examples of the armorer’s art which are decorative or ceremonial in purpose, including an 19th-century silver incense burner in the form of a falcon on its perch signed by Tatsuhiro. A highlight of the gallery is an ornate Shinto wheel shrine. Carved during the late 18th and early 19th centuries, the shrine represents 15 years of work begun by Genzo Komatsu and completed after his death by his son. Wheel shrines were carried through the streets during festivals to honor the kami, or spirits. Rich in symbolism, the shrine is elaborately-decorated with fantastic carved creatures.