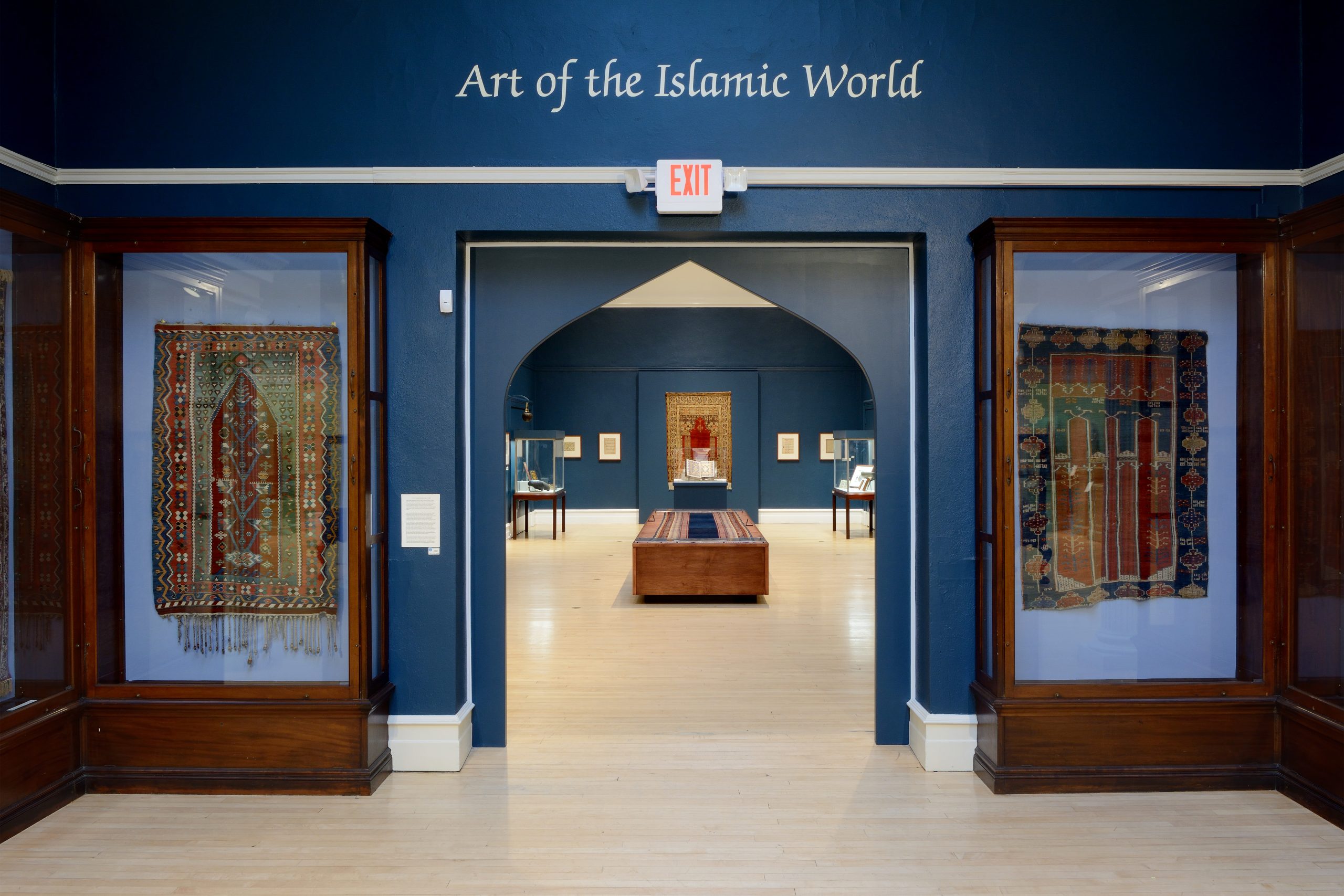 Welcome to the Art of the Islamic World Gallery at the George Walter Vincent Smith Art Museum! The gallery features objects created between the 9th and 19th centuries in Iran, Central Asia, India, Egypt, and Turkey. Although not necessarily religious in nature, the artwork found in this gallery is termed “Islamic” because it was produced in lands historically ruled, and inhabited by, Muslims. On display are numerous objects originally acquired by Springfield collector George Walter Vincent Smith as well as manuscripts, miniature paintings, and a contemporary art installation from the holdings of the nearby D’Amour Museum of Fine Arts. In this blog, we will explore highlights from the gallery.

We begin with the Qur’an, the holy book of Islam, which literally means “recitation,” and has played a significant role in the development of the art of calligraphy, or ornamental writing. Early Muslims strived to record the Qur’an accurately and beautifully, so as to ensure that the book became worthy of divine revelation. As a result, a new calligraphic form was created, displaying specific proportional measurements and a pronounced angularity and squareness, with short vertical strokes and extended horizontal lines. It became known as kufic script after the city of Kufa in southern Iraq and became the preferred script for the transcription of the holy book.

The text is written from right to left in Kufic script, using black ink, opaque watercolor and gold on parchment, an early writing surface made from animal skin. The durability of parchment and its smooth appearance made it ideal for recording the sacred text in the centuries before the introduction of paper in the Islamic lands. The page reads from a chapter titled, Sura Al-Hujurat (meaning the Rooms). Red dots, visible above and below the black letters help in the pronunciation of words.

Carpets are extremely important in Islamic culture, with prayer rugs among the most common forms of religious art. Prayer rugs are often small in size, and feature a nicke design evoking the Mihrab or prayer niche in a mosque. Muslims perform five prayers, known as salat, on a clean surface at the same time and toward the same direction every day. A prayer rug, which is easily transportable, can function as both a surface on which to perform salat as well as a wall decoration to symbolize the mihrab.

The red, central field, with an arch supported by two columns, creates the sense of an architectural space, a representation of a Mihrab. The suggestion of a mihrab is heightened by the lamp suspended from the arch. Ornamented hanging lamps were customary in historical mosques and provided light as well as decoration. The depiction of the mosque lamp also carries significant religious meaning.

This verse, from the Qur’an, Sura al-Nur (meaning the Light) explains the religious symbolism of the lamp within a niche:

God is the Light of the heavens and the earth;
The likeness of His Light is as a niche
wherein is a lamp
(the lamp in a glass,
the glass as it were a glittering star)…

While prayer rugs serve an important religious purpose, other textiles on view in the Art of the Islamic World Gallery were created as functional items for domestic spaces. Woven bands, or tent girths, were essential in tent construction and provided the necessary tension to brace the domed roof against wind and weather. Among nomadic weaving traditions, Turkmen were known for their creation of distinctive tent bands that were wide in format and featured an impressive decorative range.

Turkmen weavers often creatively combined areas of woven pile with plain cloth to produce varied textures and designs. Displayed on the exterior of a tent, girths would have served as an important demonstration of the quality and skillful execution of the weaver.

The city of Iznik, in northwest Turkey, was an important center of ceramic production during the fifteenth, sixteenth and early seventeenth centuries. Iznik ceramics initially displayed blue-and-white decoration. However, by the second half of the 16th century, green, purple, and turquoise were added to the color scheme. Pottery often was decorated with stylized Ottoman flower motifs such as tulips, roses and hyacinths, fused with gracefully twisting leaves and blossoming branches.

These two bowls, made in the 16th or early 17th century and decorated in shades of blue, green, and red on a white background, display floral designs typical of the classic Iznik style. The rim of the plate on the right also features a swirling cloud design, a decoration which originated in China, and became popular on Iznik wares.

The larger bowl is decorated with beautiful red roses and a tulip, motifs characteristic of the Ottoman floral style. The flowers are interspersed with winding blue and green leaves with serrated edges, known as saz leaves. The leaf design was introduced to the Ottoman court by the 16th century Iranian painter, Shah Qulu, who moved to Istanbul at the beginning of the century. Both the saz and floral styles developed in the Ottoman court and came to be used in a wide range of art throughout the vast territory of the Islamic Empire.

The final work that we’ll discuss today is an illustration from the Shahnama, or Book of Kings. A masterpiece of world literature, this epic poem was written by Persian poet Abu’l Qasim Firdausi around 1010. It narrates the Iranian version of the history of the world from the time of the first men up to the fall of the Persian Empire in the early seventh century. Over the centuries, the heroic qualities of the characters featured in the epic inspired numerous kings and rulers of Persia to commission ornately illustrated copies of the Shahnama.

The painting here, made in Iran in the late 16th century, depicts the battle between Rustam and Khakan of China. Rustam is Iran’s legendary national hero and the main character in the Shahnama. When the Khakan of China invaded Persia, Rustam called upon him to surrender or be doomed. The Khakan thought these were confrontational words and attacked. This painting shows the foolishness of such action in a humorous manner, as the fearless hero Rustam on his legendary horse, Rakhsh, has speared the Khakan in an indelicate place. The Chinese warrior sprawls through the air while his horse looks back in surprise, wondering where his rider has suddenly gone.

The painting nearly occupies the whole page, and includes conventional aspects such as the horizon line against a gold sky and numerous figures. Rustam is located at the center of the composition and is slightly larger than the other figures. He is also identified by his leopard skin hat, which is part of the hero’s traditional battle attire and symbol of his power.

There are many more stories and works of art to discover in the Art of the Islamic World Gallery at the George Walter Vincent Smith Art Museum. We invite you to see the entire gallery, and the magnificent objects on display, in person.

Aki Kabiri, born in Iran, received her MA from the University of Massachusetts Amherst in Art History and Architecture, focusing on Islamic Art. She is also interested in human rights, particularly for women who have lost their absolute rights due to injustice and all forms of discrimination.

Maggie North is the Curator of Art at the Springfield Museums. She can be reached at mnorth@springfieldmuseums.org.