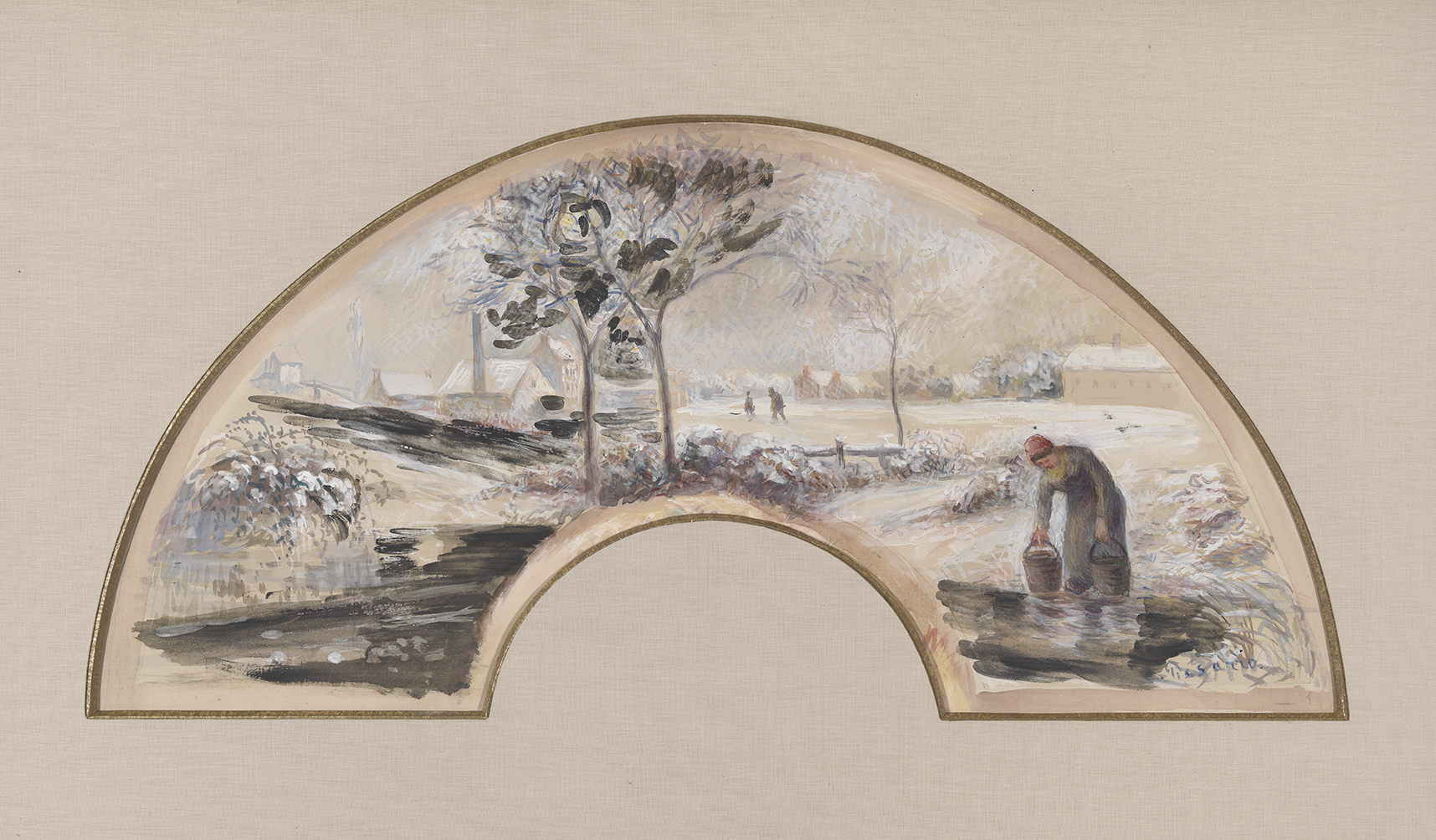 Departing from the rectangular constraints of a typical canvas, Camille Pissarro’s gouache and watercolor painting titled Winter, the Outskirts of Lower Norwood takes the unusual shape of a folding hand fan. Painted on silk and housed in the collection of the D’Amour Museum of Fine Arts, this vignette was created just one year after the third Paris World’s Fair, the Exposition Universelle of 1878, which featured displays of Japanese imports that were novel to European audiences. Trade between Japan and France had commenced only a few decades earlier, when an American expedition ended over 200 years of relative isolation in Japan, and prompted increased exchange between Japan and the West. By the 1860s, exported goods such as folding fans, kimonos, and Japanese woodblock prints had captured the attention of the French public, and were especially popular among artists as creative inspiration.

Camille Pissarro, a pioneer of the French Impressionist style and a participant in the First Impressionist Exhibition of 1874, joined his friends and colleagues in blending Japanese techniques and formats with his own artistic practices. In fact, an etching by Pissarro’s contemporary James Tissot (French, 1836-1902), also found in the collection of the D’Amour Museum, takes its long, vertical format from a Japanese hashira-e pillar print and shows a fashionable Parisian woman cooling herself with a fan. Winter, the Outskirts of Lower Norwood is one of many fans that Pissarro produced in the late 1870s, likely at the urging of the artist’s friend Edgar Degas (French, 1834-1917) who, inspired by Japanese fans, proposed to devote ample space in the 1879 Impressionist exhibition to hand-painted fans. The collection of the Metropolitan Museum of Art includes several fans by Degas painted that very same year, including Fan Mount: The Ballet a monochrome example inspired by the stage. Interestingly, neither Degas nor Pissarro chose to depict Japanese subject matter on their fans. While Degas opted to explore his lifelong fascination with ballet, Pissarro turned to one of his favorite subjects: laborers and the land.

On the right side of this Pissarro fan, a man is depicted bending down to collect water. In the center, two distant figures appear to trudge towards homes with snow-covered roofs that are nearly concealed by a tree in the foreground. Although Pissarro was living in a suburb of Paris when the D’Amour Museum’s fan was painted, the title of the scene places it in Lower Norwood, a neighborhood located on the outskirts of London where the artist took refuge during the Prussian Invasion from 1870-1871. Thus, this fantastically cosmopolitan work, executed on a Japanese-style fan, combines a painterly sensibility that originated in France with English subject matter.

Pissarro’s fan, one of over 35 that he would create during his lifetime, serves as a reminder that artistic ideas are rarely, if ever, generated in a vacuum. It is a worldly treasure that also documents a special moment in the history of French art, one that fanned the flames of fashion for all things Japanese.

Maggie North is the Curator of Art at the Springfield Museums.

Imitation is the Highest Form of Flattery