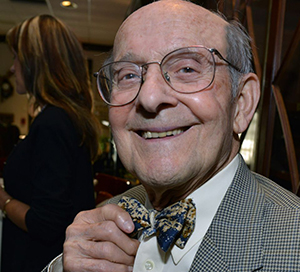 David Starr, president of The Republican and long-time friend of the Springfield Museums, died Monday, July 1, at the age of 96. We were deeply saddened to hear of his death.

“The Museums have benefited from David Starr’s life-long commitment to arts advocacy and philanthropy since he first became a Trustee in 1978,” said Kay Simpson, CEO and President of the Springfield Museums. From the onset of his Trusteeship, David sought to strengthen the Museums by organizing the Business Friends of the Arts in 1981, energetically promoting the Museums through the Springfield Newspapers, and persuading the heads of businesses and corporations to share their time and talents on the Museums’ Board and Committees. David’s leadership on the Board included his term as Chair from 1988-1990, as well as his service as Chair of three major Capital Campaigns: in 1984 ($6.6 million); from 1994-1999 ($6 million); and from 1997-1999 ( $13.9 million).

The Campaign of 1994-1999 provided the financial support for the creation of the Dr. Seuss National Memorial Sculpture Garden that David convinced Theodor Seuss Geisel, aka Dr. Seuss, to have built for him on the grounds of the Quadrangle. David’s friendship with Ted Geisel has had a deep and lasting impact on the Museums. In addition to the Dr. Seuss Sculpture Garden, the relationship David initially forged with the Geisel family led to the opening of The Amazing World of Dr. Seuss Museum in 2017. The Sculpture Garden and the Dr. Seuss Museum have attracted millions of visitors from across the country and around the world.

A generous donor as well as a tireless fundraiser, David and his wife Peggy Starr named galleries in the D’Amour Museum of Fine Arts and the Dr. Seuss Museum. “As a catalyst and a visionary, David Starr leveraged his considerable skills, influence and expertise to preserve and expand the Springfield Museums for generations to come,” said Simpson. “He will be greatly missed.”