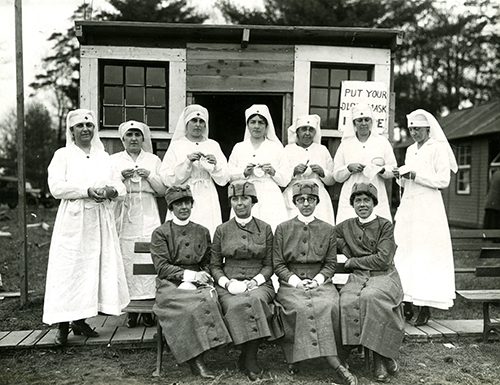 As courageous healthcare workers stand between COVID-19 and the public, the Springfield Museums staff looked to our collections to celebrate the heroism of those who risk their own well-being to help ensure the well-being of others.

Helping with a Heavenly Salve

Kay Simpson, President of the Springfield Museums, was drawn to this detail from Master MM’s The Deposition with Saints Sebastian and Roche. She noted the angel tending a plague sore with heavenly salve. 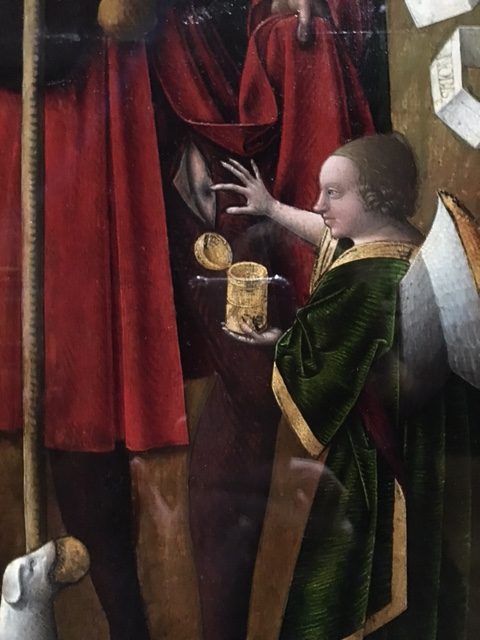 Inspiring Others to Fight Atrocities

Heather Haskell, the Director of the Art Museums and Vice-President of the Springfield Museums, chose the powerful image of the martyred British nurse Edith Cavell painted in 1918 by George Wesley Bellows. Cavell was executed by the German regime for helping soldiers escape enemy territory for safety. 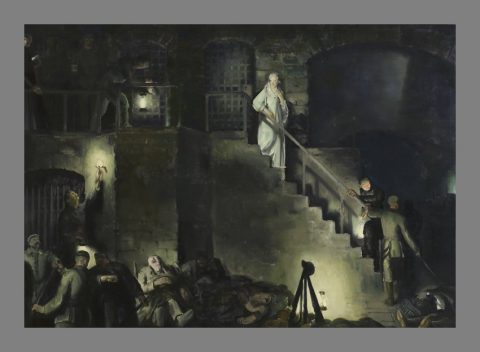 George Bellows belonged to a group of New York-based artists called the Ashcan School who often painted brash, realistic subject matter. While other American artists gravitated toward abstraction, Bellows and fellow Ashcan members found inspiration in the sprawl of urban life. They captured the crowded hubbub of the city as well as the quieter, more personal moments like a tenement couple dancing in their apartment or a trip to the barbershop.

Although Bellows was a progressive and a pacifist, German activities during World War I swayed him to support American involvement in the war. Bellows painted Edith Cavell in 1918, along with four other canvases, in reaction to the German atrocities in Belgium. British-born Edith Cavell was the head nurse of the Berkendael Institute in Brussels, which later became the Red Cross. In 1915, German soldiers arrested her for harboring French, Belgium, and British soldiers and assisting their escape to the Netherlands. She was imprisoned for two months after which she was tried, found guilty, and executed by a firing squad. In this painting, Bellows captures the moment just before her execution. Cavell stands at the top of the stairs in a white dressing gown, a symbol of her innocence. Below her a pair of German soldiers—most likely her executioners—wait for her to descend the stairs to place her against the wall to be killed. While Cavell was unjustly executed, her passing was not in vain. Allied propagandists used her death to enlist recruits and raise support from formerly involved countries.

Helping Others throughout History

Maggie Humberston, Curator of Library and Archives, found images of healthcare professional throughout the decades to share.

She noted that the profession of nursing is long-associated with a level of personal care and compassion that makes all the difference for those in need. Springfield’s nursing teams have faced innumerable challenges with grace and resilience as portrayed in this series of images from our archives. 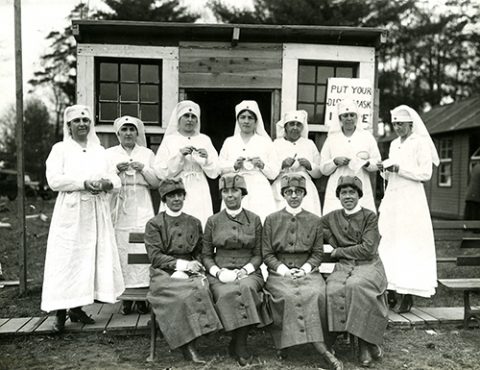 These Red Cross workers pose briefly for a photo at the Massachusetts State Guard Emergency Hospital erected to combat the 1918 influenza epidemic. They hold protective masks in their hands or laps. The sign behind them reads Put your old mask in here” and is positioned above a cauldron of boiling water used to disinfect the cotton masks. The open air tent hospital (pictured below) operated from Oct. 30th – Nov.14th and treated 229 cases.  It was located at the ball field in Springfield’s Forest Park.  Eight similar camps had been successfully constructed throughout the state. 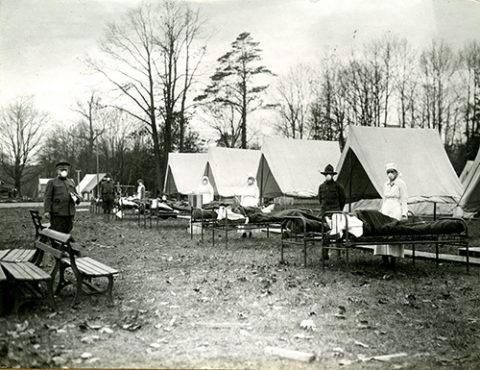 Below please find a series of images that span the decades: 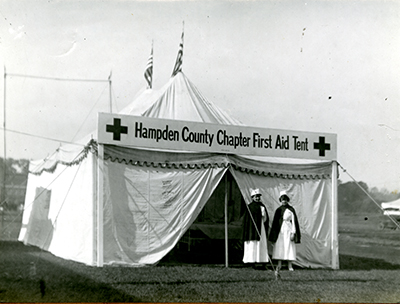 The Hampden County Chapter of the Red Cross was formed in 1906. After working tirelessly for both the troops and the home front during WWI, these dedicated women continued to serve their community in many ways. In this photo they staff a First Aid tent at the 1919 Eastern States Exposition in West Springfield. 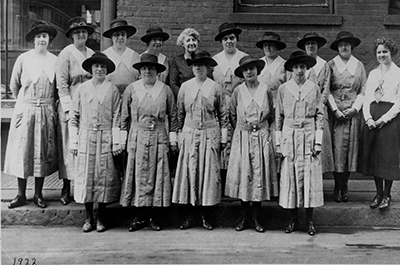 This 1922 group of VNA nurses is ready to head out for their work day. As well as providing quality in-home nursing care and physical therapy to patients, the VNA held well-baby clinics and taught women about healthcare. Today they also assist patients and their families with dementia and  hospice care. 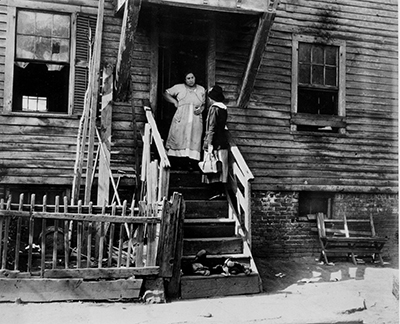 A  VNA nurse calls on a family at home to offer her services. The Visiting Nurses Association (VNA) was established in Springfield in 1914 with six registered nurses who made home visits to care for patients. 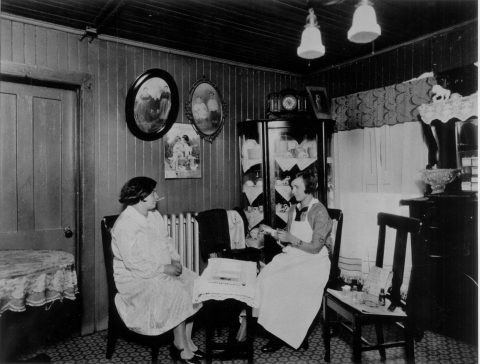 A VNA nurse takes a patient’s temperature in her own home. These community nurses examined patients and offered professional in home care. 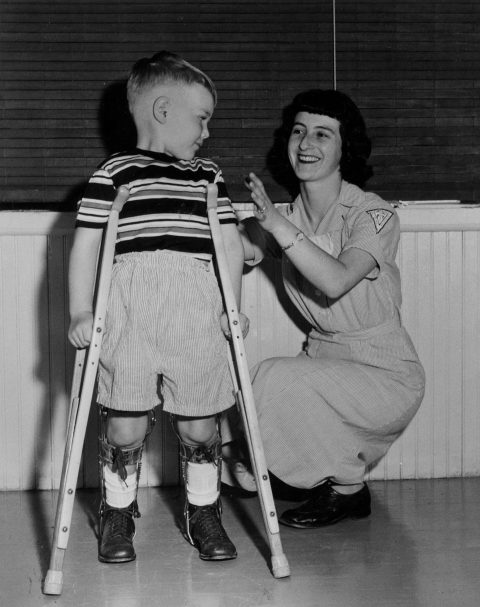 This  young boy is a polio patient who is being assisted by a VNA Physical Therapist. 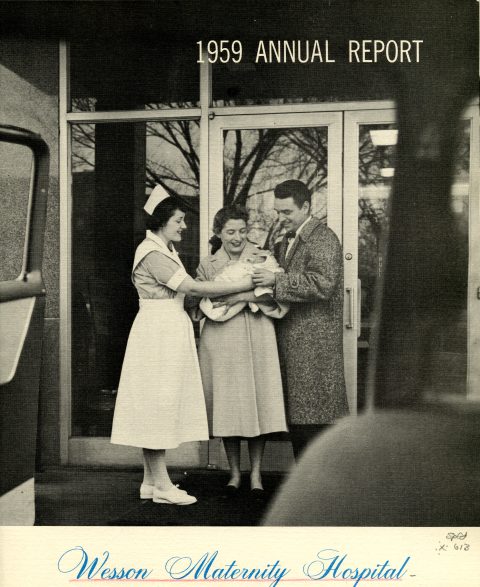 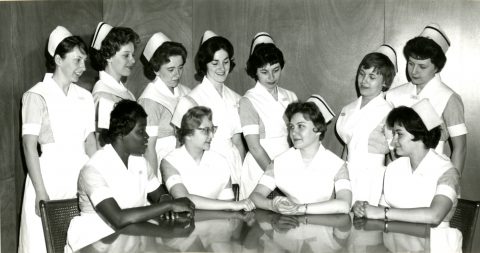 The Board of Springfield Hospital established a training school for nurses in 1892 and graduated nurses until its closure in 1999. 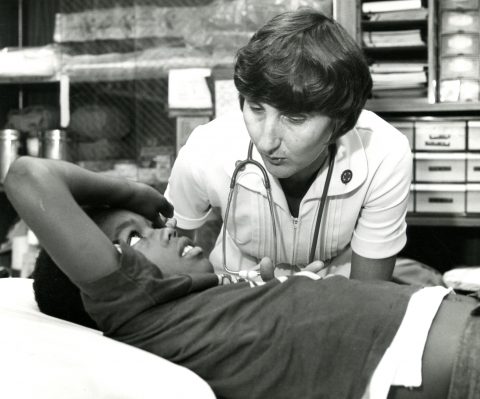 A young boy is comforted by a Bay State Medical Center nurse in the Emergency Room. 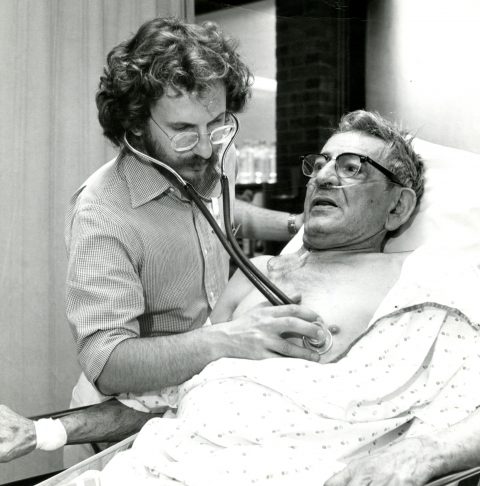 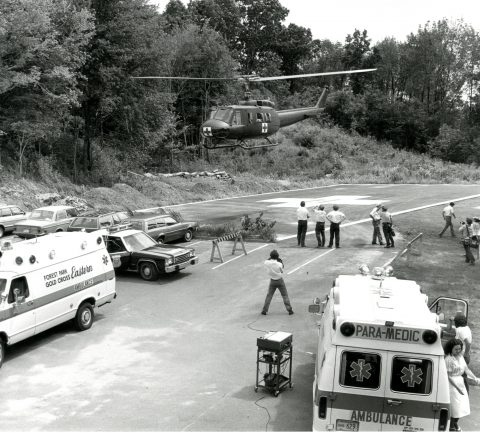 A helicopter arrives with a patient to be transported by waiting ambulance to the Emergency Room at Bay State Medical Center. 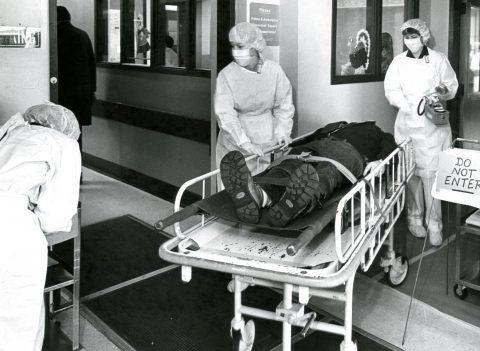 Thank you Healthcare Workers! May you be well and safe.