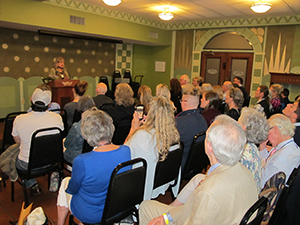 The descendants of Lucy Walker Mallary, recipient of a Pynchon Medal in 1928, gathered in the Deco Room of the DMFA on Sunday, May 12th (Mother’s Day), for a reunion to honor “Mother Mallary,” as she was known to the immigrant population she served so steadfastly in Springfield. 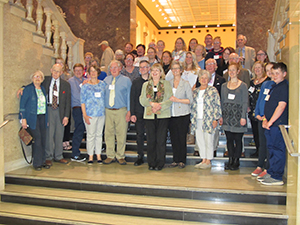 Mallary was appointed by the city’s Congregational Union to the position of Missionary at Large, and entrusted with  reaching  out to help the large population of  immigrants settling in Springfield in any way she saw fit.  From 1912 to her death in 1932 she tirelessly counselled thousands of immigrants, finding them employment, making sure they had clothing and housing, caring for them when they were sick, attending births, and most importantly, extending the hand of friendship to those bewildered by the ways of a new country, language, and culture.

to the Wood Museum, to enhance the exceptional archival collection of her papers which was received from the family in 2010.  Mallary was only the second woman to receive the honor, and her Pynchon medal becomes the first in the museum’s object collection awarded to a woman. More than forty family members attended the afternoon’s celebration, coming from California, Virginia, and all over New England.