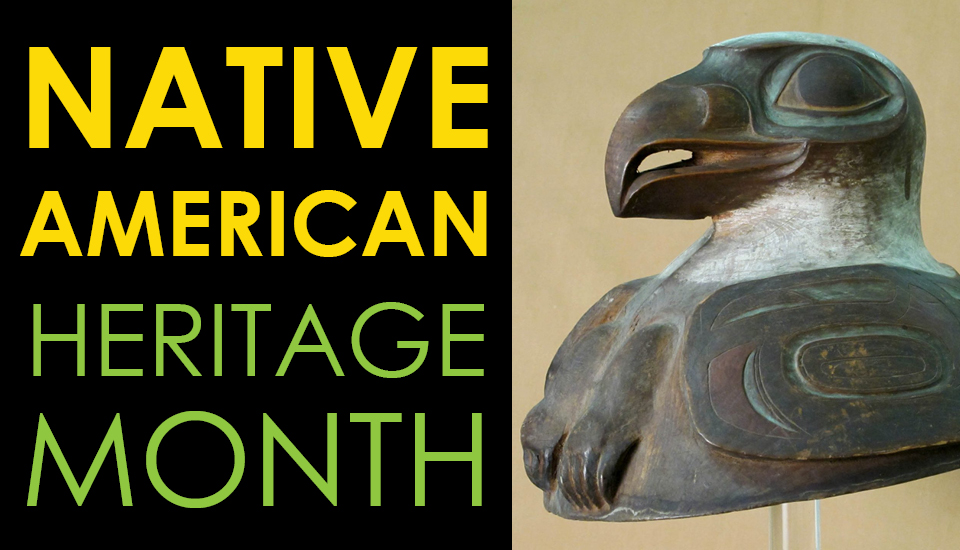 Each November, the United States celebrates Native American Heritage. At the Museums we honored indigenous peoples by sharing objects and artwork from our collections on social media and as part of Treasures at the Springfield Museums in the Sunday Republican. Here are three objects we highlighted. 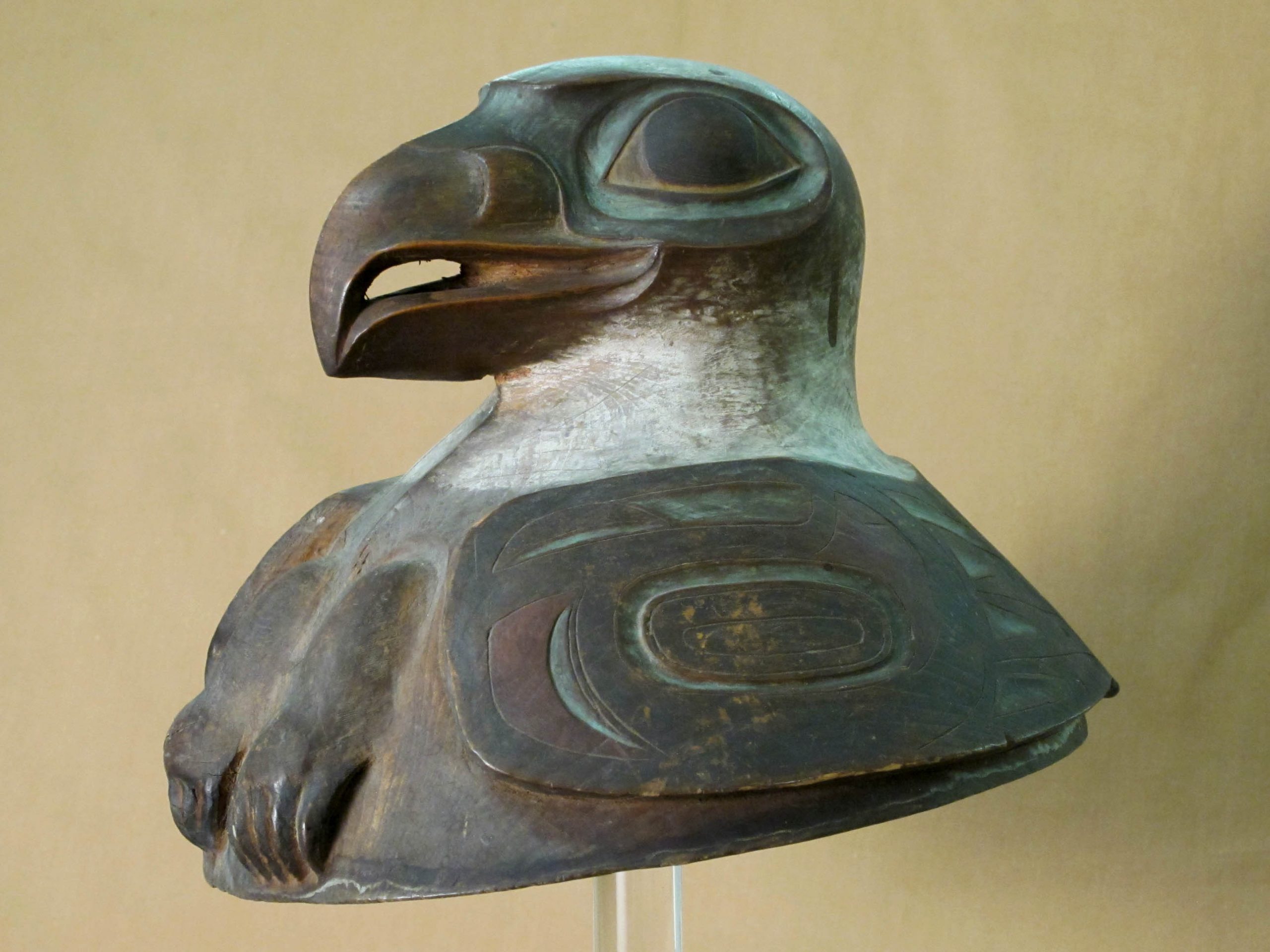 The object seen here was misidentified in the Springfield Museums’ collections for over 100 years as an “Aleutian hat.” Thanks to some sleuthing by members of staff, the object was recently identified as a Tlingit war helmet, one of about only one hundred known to still be in existence. Between 1901 and 1904 museum specialist Albertus Lovejoy Dakin identified the helmet as an “Aleutian hat” when the collection moved into its own permanent building on the Quadrangle. That myth was further perpetrated by later museum director Leo D. Otis when he assigned it a permanent museum collection number. Tlingit war helmets are handed down from previous descendants. While viewed as works of art, Tlingit war helmets are actually important historical documents that embody the origin stories of the clan and past clan leaders. Beginning as protection for Tlingit warriors in battle, war helmets today serve the Tlingit as healing reminders of their rich and ancient history. You can see the helmet on view in Native American Hall in the Springfield Science Museum. 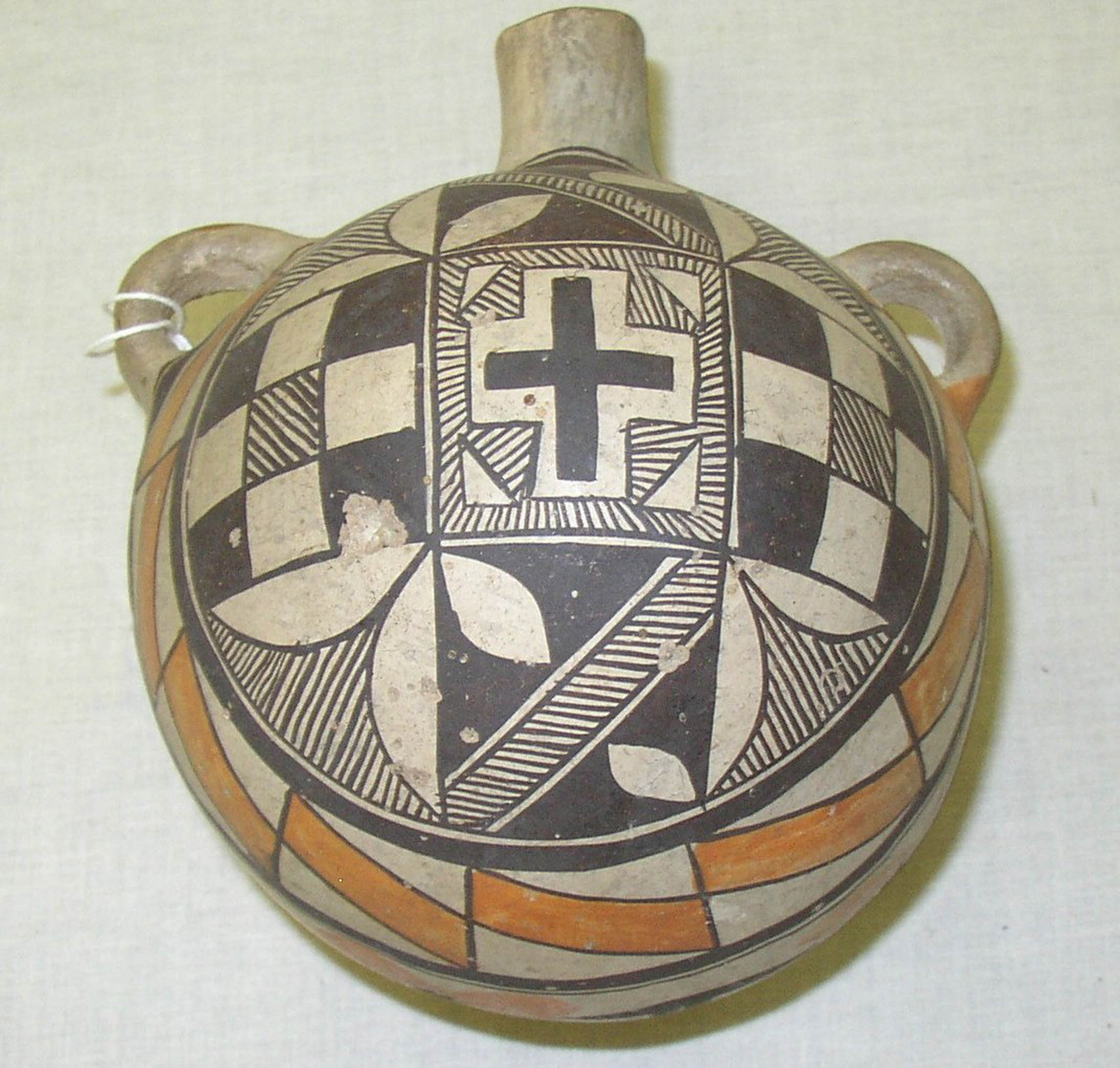 This canteen, a traditional device made by potters and used by people to carry water with them when they went to work in the fields,  was made by Nampeyo (1859-1942) and came to the Springfield Science Museum in 1982. Nampeyo, a famous Hopi pottery artist who is credited with the renaissance of Hopi pottery at the turn of the 20th century, learned the craft from her grandmother and was considered one of the finest potters in her region by the time she was an adult. She made traditional “Polacca” or “crackle ware” pottery. Fascinated by the smooth yellow pottery of the prehistoric pueblo of Sikyatki near where she lived, Nampeyo experimented with a variety of different clays and paints in an attempt to duplicate it. When archaeologists excavated one of the Sikyatki ruins in 1895, they found about 500 pieces of pottery. Nampeyo and her husband Lesou copied as many of the designs as they could, which allowed Nampeyo to incorporate them into her own work. The production of the Sikyatki-themed pottery triggered the Sikyatki Revival, as Nampeyo’s pieces were an instant success. (Donated by Charles W. Hull) 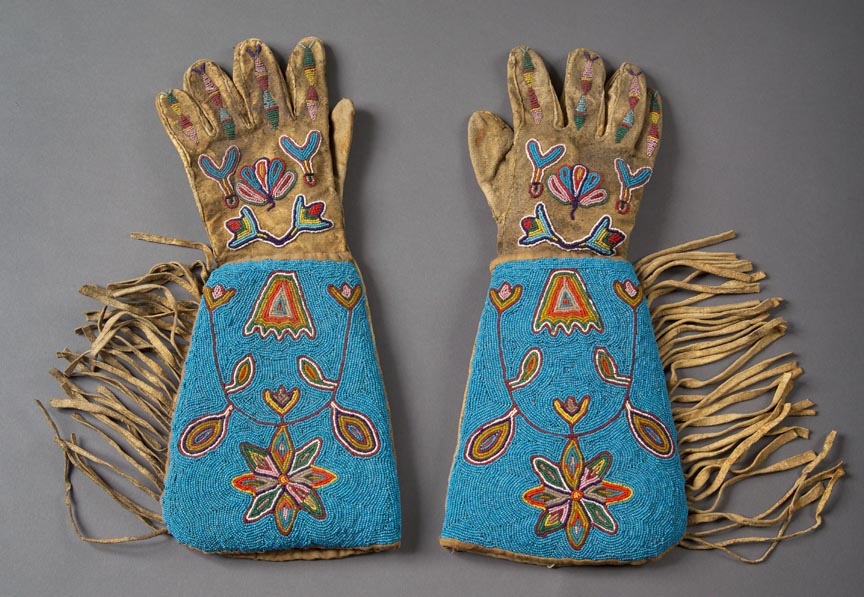 These gloves, attributed to the Sioux, were inspired by gauntlets brought to the American plains by the U.S. Cavalry starting in the 1870s. Native Americans adopted them, but modified gauntlets for their own purposes. While not traditional Native American dress, these large cuffed leather gloves were intricately decorated with beads to be sold to natives and non-natives alike. Natives might wear the gloves for special occasions, accenting them with a beaded vest, leggings, or moccasins. But these same beaded gauntlets also became part of the fancy dress for rodeo cowboys and featured in western pageants during the late 19th and early 20th centuries. Creating these works of art through beading gauntlets was a means for Native American women to express their creativity while showcasing traditional cultural motifs and designs. Popularity for the garment waned, however, and demand for beaded gloves tapered off in the 1940s.

Girl Scout Gold Award Winner: Do Try This At Home!