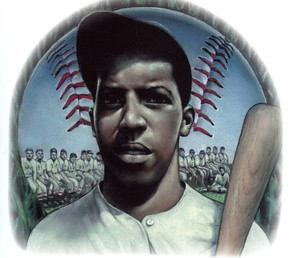 A Home Run for Bunny: How a Springfield Team Took a Stand Against Discrimination

In 1934, Springfield’s  American Legion Post 21 sent a baseball team of talented 15-year-olds to the Eastern Regional Championships in Gastonia, North Carolina. The team had one African-American player, Ernest “Bunny” Taliaferro.  Segregation was in force in the South, and the Team Captain and Manager were told that Bunny couldn’t play baseball in Gastonia. So they gave the team a choice: to play without Bunny, or to pack their bags and go home in a show of support against discrimination. The team had a chance to advance to the National Finals in Chicago if they played. The vote to return home was unanimous.

This inspiring story happened on Aug 23, 1934. When the train with the returning team rolled into Springfield there was a huge crowd waiting to cheer the true champs.  The exhibit features illustrator Gerald Purnell’s pastel interpretations of the events for the book A Home Run for Bunny written by Richard Andersen.