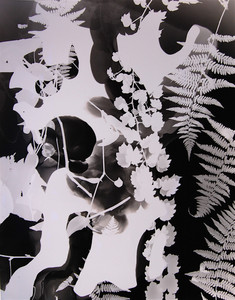 A series of dreamlike photographic images called “photograms” by Wilbraham artist Paul Bloomfield, created in a darkroom by placing objects such as pieces of string or grains of rice directly on photographic paper. The paper is then exposed to light and processed using developing chemicals. When complete, the areas that were covered by the objects appear white against a dark background.

Manipulating light, objects and often chemistry fascinates the artist who also enjoys the immediacy of traditional media such as painting and drawing. For example, Bloomfield sees similarities between a tree branch and dripping paint, and makes visual and psychological connections between the principles of design and the architecture of nature.

The first use of the photogram as an art medium is attributed to William Henry Fox Talbot (1800-1877). Later, photographer Man Ray (1890-1876) explored this approach by creating “Rayographs” which took advantage of the effects of negative imaging. Twenty-first century artist Paul Bloomfield has resurrected this long-forgotten approach in his intriguing collection of photographic images which are unadulterated by contemporary tools like the digital camera or digital photo manipulation.

Bloomfield is chair of the fine and performing arts department at Wilbraham and Monson Academy in Wilbraham.