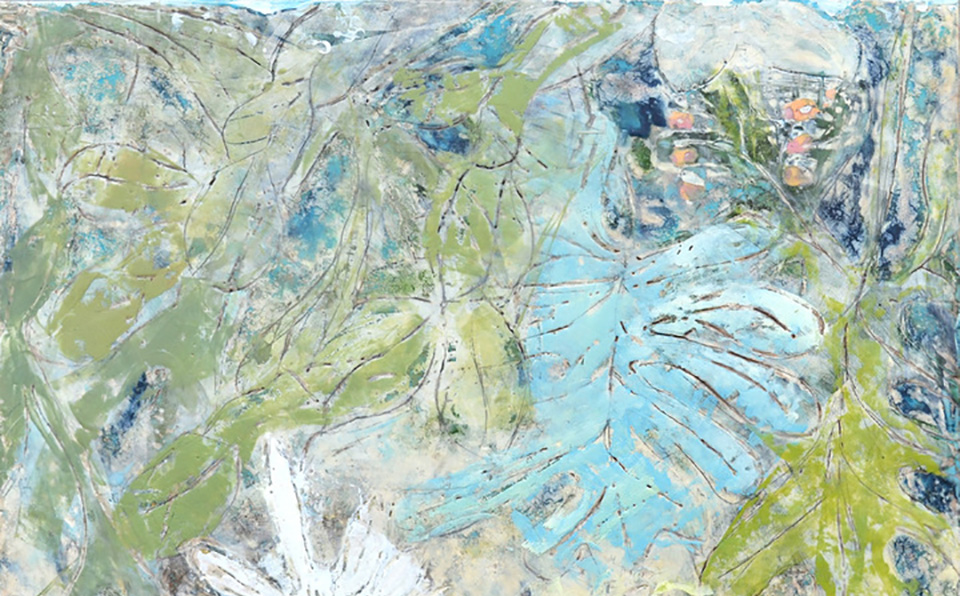 Debra Claffey, Patricia Gerkin, Donna Hamil Talman, and Charyl Weissbach make up the four artist collective called Elemental. Working in Massachusetts and New Hampshire, the artists of Elemental meld the ancient medium of encaustic, or melted wax, with a modern topic. The pieces in this exhibition explore the human relationship to the natural environment, advocating for a more connected, sustainable approach in the 21st century. The textured surfaces and layered compositions of these pieces sometimes evoke the topography of the earth’s surface, the patterns of plant life, or reinvent the traditional seascape painting.

Debra Claffey is a visual artist who uses encaustic, oil, and mixed media in her work. She holds a BFA in Painting from the School of the Museum of Fine Arts in Boston and Tufts University and an Associate’s Degree in Horticultural Technology from the University of New Hampshire. In 2011, she received an Artist Entrepreneurial Grant from the New Hampshire State Council on the Arts and the National Endowment for the Arts. Claffey’s work has won several awards, including the Second Place Award at the Monotype Guild of New England’s Fifth National Monotype Exhibition in May 2018. Claffey is a former President of New England Wax, and Past President of the New Hampshire Chapter of the Women’s Caucus for Art.

Claffey writes a blog, Making Something Out of Nothing. Additionally, she has curated five exhibitions, the most recent being The Space Between Shadow and Light for the Eleventh International Encaustic Conference in Provincetown, Massachusetts in June 2017.

Raised in Connecticut, educated in Massachusetts, she now lives and works in New Boston, New Hampshire.

Charyl Weissbach received a BFA in painting and art history from Massachusetts College of Art & Design. Her studio is located in Boston’s SoWa Artist’s District. Her artwork is in many private and corporate collections, including Brigham & Women’s Hospital, Harvard Pilgrim Healthcare, University of Pennsylvania, Winchester Hospital, Novacare, and Oracle Pharmaceuticals. Images of her paintings are featured in Encaustic Works 2012: A Biennial Exhibition in Print, 100 Artists of New England, Boston Magazine’s Design Home, and in the book Encaustic Art in the Twenty-First Century. She has presented at the International Encaustic Conference. Additionally, she is represented by multiple galleries and has exhibited at public institutions such as Danforth Art Museum, Art Complex Museum, Fuller Craft Museum, and the Saco Museum.

Donna Hamil Talman’s expressionistic paintings and monotypes address the way life—of the land, sea or body—evolves. Her works are increasingly concerned with changes resulting from human interaction.  Utilizing natural materials, Hamil Talman appreciates the way processes of encaustic mimic those in geology and make visible the passage of time.

Hamil Talman has had solo exhibitions in Venice (Italy), New York City, Houston, Seattle, Chicago, and Boston, and her art is published in La Fotografia (Barcelona), The Book of Alternative Photo Processes (Christopher James), Creative Vision (Jeremy Webb), and is in numerous collections.  Hamil Talman earned her MA at Clark University and has done several international residencies and received multiple grants. Her work has been described in the Chicago Tribune as “…her nearly chaotic but gently poetic compositions resemble patterns on a rock face or an old wall.”

Pat Gerkin’s abstract paintings and mixed media have been exhibited in numerous solo and group shows throughout the Washington, DC, area and New England, and she has exhibited in several museum shows.

Gerkin received her BA from Fairmont State College, and she has studied art independently and through the Corcoran School of Art, Arlington Arts Center, NOVA, and The Art League.  She is an Associate Artist of the Torpedo Factory Art Center in Alexandria, VA; a member of the Ogunquit Artist’s Association in Ogunquit, ME; a former member of the Copley Society of Boston, and of the Women’s Caucus for Art.  She was a founding member of New England Wax and Painters & Poets. She is represented by McGowan Fine Art, Concord, NH; Powers Gallery, Acton, MA; L’Attitude Gallery, Boston, MA; Barn Gallery, Ogunquit, ME; and Art3Gallery, Manchester, NH.

Additionally, Gerkin was awarded an artist’s fellowship for painting at Vermont Studio Center, 2001, and was chosen to represent the U.S. and exhibit two works in the American Embassy in Kuwait, 2016-2017, as part of the Arts in Embassies program of the U.S. State Department. Her works are included in many collections in the U.S., Brazil, and Europe.