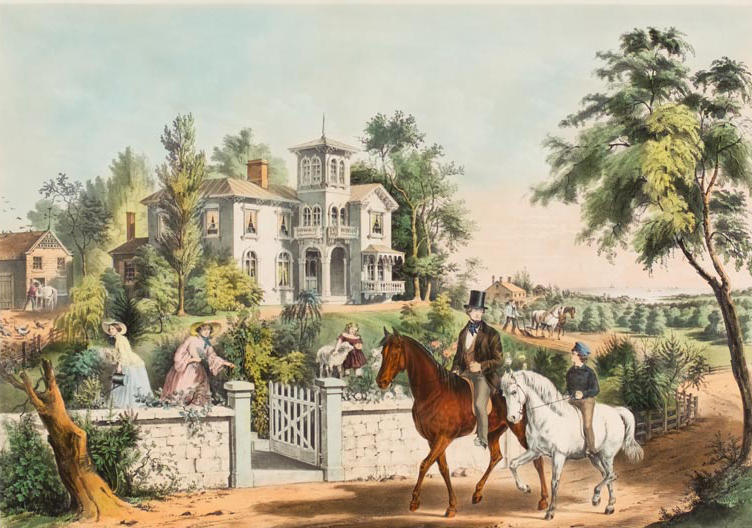 Although her designs adorned the walls of homes and businesses across the United States in the 19th century, the name Frances (“Fanny”) Flora Bond Palmer (1812-1876) remains largely unknown. While working behind the scenes for the American lithography firm Currier & Ives, Palmer designed over 200 prints that described American life and captured the nation’s imagination. Today, Palmer’s scenes of country living, outdoor recreation, national progress, and newsworthy events continue to rank among the most popular lithographs produced by Currier & Ives. Thanks to recent scholarship on the artist’s life and work, Palmer’s important contributions to the history of American art are finally being recognized.

Before immigrating to the United States from England in 1843, Fanny Palmer taught drawing classes, sold illustrations, and partnered with her husband, Edmund Seymour Palmer, to operate a lithography business from their home in Leicester. When they arrived in New York City with their two children, the couple continued on as business partners. However, by about 1849, the husband-wife business had dissolved and Fanny Palmer alone was receiving commissions from an intrepid New York businessman, Nathaniel Currier (1813-1888). Recognizing her aptitude for atmospheric coloring, architectural renderings, and depictions of rural scenery, it was not long before Currier hired Palmer on a full-time basis, making her the only woman on staff employed to design illustrations that would be transferred to lithographic stone.  Tragically, in 1859, just two years after Nathaniel Currier partnered with James Merritt Ives (1824-1895) to form Currier & Ives, Fanny Palmer’s husband died, leaving Palmer to support her children and extended family.

For over two decades, Palmer contributed to Currier & Ives’ artistic and financial success while excelling as her family’s breadwinner, an unusual position for a woman of her time. Palmer’s skillfully rendered compositions articulating a yearning for peaceful rural communities, traditional family values, and expressing national pride struck a chord with the American public. Her artistic training and keen observation of the natural world also served her well. In fact, many of her outdoor scenes were sketched from life during family hunting and fishing trips or while traveling to rural parts of Long Island. Due to their quality, the works that Palmer designed for Currier & Ives, like those on view in this exhibit, were typically printed in large sizes and sold at higher prices.

Although she received little recognition in her lifetime, Fanny Palmer overcame economic difficulties, familial hardships, and defied expectations about women’s roles in the 19th century. Described by colleagues as kind, refined, and hard-working, Palmer left a positive impression on all those she encountered and her influential lithographs continue to shape the fabric of American memory and culture.

The exhibition was inspired by, and is dedicated to, Charlotte Streifer Rubinstein and others who contributed to the 2018 book Fanny Palmer: The Life and Works of a Currier & Ives Artist.