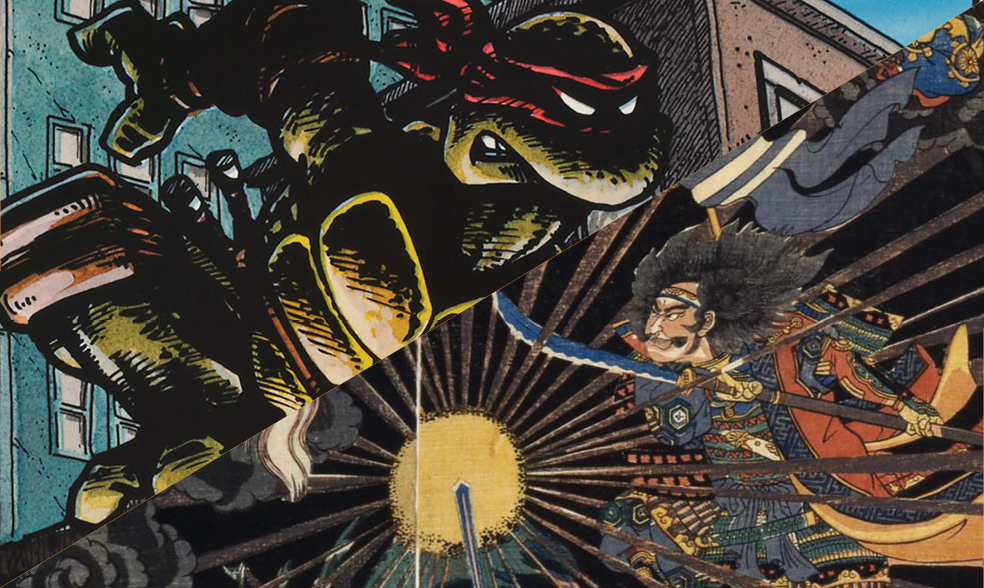 A unique and imaginative exhibit that brings together original graphic novel art from the collection of local Teenage Mutant Ninja Turtles enthusiast Elias Derby and the Museums’ own world-famous collection of Japanese artwork, arms and armor.

The creators of the Teenage Mutant Ninja Turtles, Kevin Eastman and Peter Laird, first met in nearby Northampton, Massachusetts in 1981. After publishing their first TMNT comic book while living in Maine in 1984, they returned to Northampton and continued the joint publishing operation under the name Mirage Studios. Since then, the characters of Leonardo, Donatello, Raphael, and Michelangelo have become cult heroes among aficionados of comics and graphic novels. Known for their swashbuckling style, their “Cowabunga” rallying cry, and their love of pizza, the characters have been featured in numerous comic books, graphic novels, and movies over the past three decades. Their commitment to protecting the innocent as well as their adherence to the bushido code of honor, discipline, and morality harkens back to the age of the samurai (1185-1867). The exhibit includes nearly 80 original illustrations including examples by Eastman, Laird, and over 20 renowned graphic novel and comic book artists.

These modern representations of the turtle warriors take on new meaning when juxtaposed with the imagery and trappings of their samurai ancestors. Numerous scholars have lauded the Springfield Museums for the quality and depth of their Japanese collections, particularly in the areas of ukiyo-e prints and samurai arms and armor, and have ranked their holdings of Meiji-era art as among the finest of any public institution in the world. A selection of woodblock prints from the permanent collection depicts legendary Japanese warriors and battles, adding historical and visual depth to the exhibition.

George Walter Vincent Smith, whose collection is housed in the museum that bears his name, was fascinated by Japanese arms and armor, especially swords. Many of the weapons on view date back to the 14 and 15th centuries, and feature intricate embellishments of dragons, flames, and other decorative motifs on the blades, handles, and scabbards. The exhibit features a selection of swords, traditional helmets, and includes one of the museum’s most special treasures: an impressive, complete suit of samurai armor that was created in the 16th century.

An interactive, Saturday morning TMNT cartoon area and activities based on samurai warriors is also on offer for children and families within the exhibition gallery.