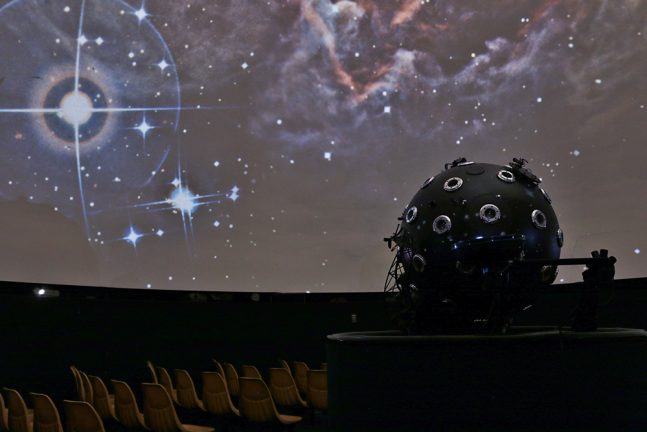 The Seymour Planetarium will close in late winter/early spring 2020 for renovations.

The Springfield Science Museum is home to the Seymour Planetarium, the oldest operating planetarium in the United States. Multiple schools are scheduled in the planetarium at one time. Students get preferred seating; adults may be asked to stand or tour the museum during the show.

The Magic Sky
Grade P-K Join Jesse in a dream adventure sparked by a bedtime story about the night sky. Through story and song, children explore the concept of day and night and discover that the sun is really a star.

Our Cosmic Neighborhood
Grades 1 and up Through dramatic planetarium images and effects, participants explore their cosmic neighborhood, the solar system. Concepts include the nature of the sun, moon and planets, the Earth’s rotation and revolution, and a look at the other members of our solar system, including moons and comets.

More than Meets the Eye
Grade 4 and up The program illustrates what we can see in the night sky, what we can expect to see through a telescope, and how celestial objects appear to the robotic eyes of unmanned spacecraft.

The Night Sky
Grades 3 and up What is that you’re seeing in the sky at night? With the planetarium stars as the backdrop, find out how to locate and identify celestial objects, planets, and constellations as the seasons change.

Oceans in Space
Grade 5 and up Fasten your seat belts as you embark on an incredible journey through time and space. Investigate theories about the creation of Earth, explore evidence that life on our planet began in the depths of the oceans, and speculate about life in the farthest reaches of the universe.

Stars Around the Campfire – Digitally Remastered
Grade 5 and up Look back in time at the way early people interpreted the night sky. You’ll hear ancient myths and intriguing legends about the constellations, the Moon, falling stars, comets, the Milky Way, and the Northern Lights.

Mystery of the Disappearing Dinosaurs
Grades 3 and up Dinosaurs ruled the Earth for nearly 200 million years and then, in the geological blink of an eye, they were gone forever. Travel far out into space, deep inside the earth and back in time as we try to unravel the mystery of the disappearing dinosaurs.