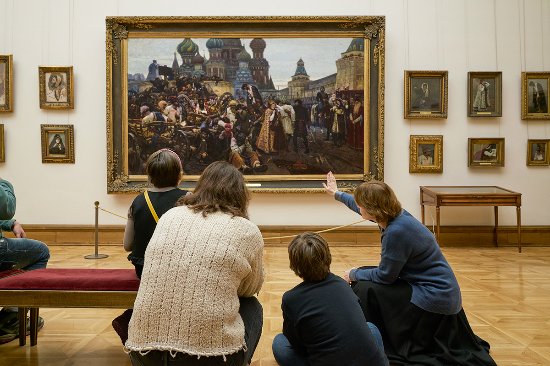 A Visit to the Tretyakov Gallery of Art in Moscow

This is an online class!

Few Westerners are familiar with Russian Art, its rich heritage, its profound roots in both Russian soil and history. The Tretyakov Gallery, created by brothers Pavel and Sergei Tretyakov, represents one of the great repositories of Russian art from its origins to the present day. Enjoy a dynamic virtual tour of the museum and some of its major holdings that provide insights into the Russkaya dusha, the Russian soul with Professor Dr Simon Sibelman.

In 2009, he assumed the position as Assistant Executive Director of the Virginia Holocaust Museum, rising to the position of Executive Director in 2012.  In 2013, he was appointed director of the Center for Judaic, Holocaust, and Peace Studies at Appalachian State University where he was also awarded the Leon Levine Distinguished Professorship of Judaic, Holocaust, and Peace Studies.

Dr Sibelman currently resides in Western Massachusetts, and is a frequent and well-respected lecturer at the Museum School of the Springfield Museums.

The day before the first class you will receive an invitation from the Museum School to join the online lecture in the (free) Zoom application.

Watch this orientation video if you are new to Zoom: https://youtu.be/hIkCmbvAHQQ. You may download and install the Zoom application at any time. We recommend you do this at least one day prior to your first online class. Choose the download option that best fits your technology. Unless you will be using an iPad or mobile device, the first option is most likely the one you’ll need.

The Day of Class
1. Class will begin at 10 AM. Simon will be on Zoom 15 minutes before the class starts.
2. You may login early, but if you step away from your computer before class starts leave Zoom open.
3. Connection is better if you close all web browsers on your computer while on Zoom.
4. Due to high volume on Zoom, connection may be imperfect at times.
5. If you have technical issues during class, quit Zoom and then login again. If you still have trouble, shut down your computer, wait 2-minutes, and then try again.
6. You may wish to have your camera on during class, as this helps with feeling connected, however, camera mode is optional. Once you have logged in and connected, we ask that you mute your microphone. There will be time for questions and answers at the end of the lecture.
7. You may want to add a photo to your profile; see these instructions. This is optional.
8. Wear a headset or earbuds or close a door to help limit background noise during class.
9. Plan ahead so that you will not be multi-tasking during the program.