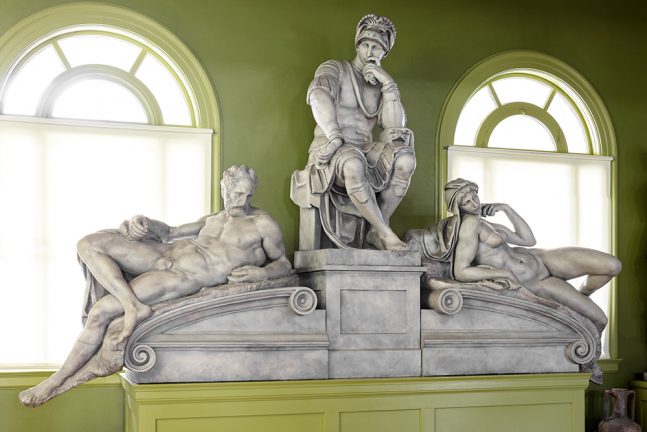 The late 19th century was the dawn of American art museums, a time when philanthropists, civic leaders, and collectors across the nation established institutions to house artistic and cultural treasures for the benefit of the public. In order to fill gaps in the young country’s still developing collections, museums frequently displayed plaster replicas of important works of art. Writing in the magazine The Nation in 1889, Boston Museum of Fine Arts curator Edward Robinson (1858-1931), conveyed “the importance of collections of casts and other art reproductions as factors of public education,” stating, “it is only through these that the body of our people can ever hope to become familiar with the great masterpieces of European galleries.” For museum visitors of this period, casts provided a rare opportunity to see celebrated Greek, Roman, and Italian works of art that would otherwise require a long and expensive trip overseas.

In 1898, just a few years after the opening of the George Walter Vincent Smith Art Museum, the acquisition of a plaster cast collection was proposed for the benefit and enjoyment of the citizens of Springfield.  Support from the estate of industrialist Horace Smith (1808-1893) enabled the Museum to purchase high quality casts from manufactures located in Boston, London, Paris, Berlin, Dresden, Florence, and Rome. When the collection opened to the public in 1899, copies of Renaissance sculptures after masters like Donatello (1386-1417) and Michelangelo (1475-1564) were installed alongside casts of ancient works like the Venus de Milo and Laocoön Group. The casts remained an important asset to the museum and the community for decades. In fact, the George Walter Vincent Smith Art Museum School was founded when a group of boys asked to sketch the casts in 1918.  By the mid-20th century, however, many museums had sold, dispersed and even destroyed their plaster casts as the preference for, and access to, original works of art increased. Here in Springfield, the casts were placed in storage and remained there until the 1970s, when a major restoration and reinstallation took place.

Today, the George Walter Vincent Smith Art Museum maintains one of the largest extant collections of plaster casts on display in New England. As both historical copies and 19th century works of art, the plaster casts on view provide an unusual glimpse into the collecting practices and tastes of early American museums and continue to serve as teaching tools. As you walk through the gallery, we invite you to not only explore the sculptures but to enjoy the captivating stories of their artistic creators and the subjects they portrayed.

New Installation: In the Gardens of Mount Olympus

Mara Sfara’s contemporary art installation In the Gardens of Mount Olympus offers a participatory exploration of the Classical world through multi-sensory experiences: sound, motion, and light. Drawing from the mythology of ancient Greece, Sfara’s work animates the Museums’ historic Plaster Cast Gallery, replicas of Classical and Renaissance sculptures. Sfara’s kinetic sculpture In the Gardens of Mount Olympus envisions the Greek gods as heroic and also wonderfully human—they are depicted whimsically as individuals with personality quirks. Influenced by Greek mythology, Sfara’s sculptural characters have a unique and appealing style that invites wonder and creativity.

Meet the cast of characters