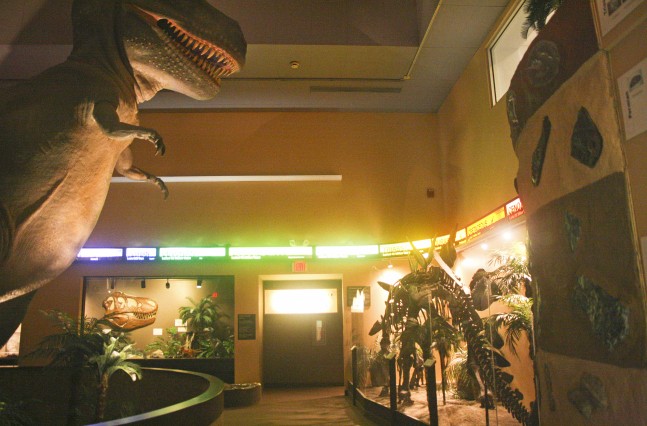 The Springfield Science Museum’s Dinosaur Hall is dominated by a life-sized replica of Tyrannosaurus rex, the 20-foot-tall meat eater who lived 65 million years ago. In addition, there is a replica of Coelophysis, an early dinosaur which lived in the Connecticut River Valley approximately 200 million years ago. There is also a full-sized replica of a Stegosaurus skeleton which was made from a cast of an actual skeleton at the American Museum of Natural History in New York. Dinosaur Hall also contains participatory exhibits such as actual fossils of dinosaur tracks which can be touched, a cast of a huge sauropod footprint for children to climb into, and a visitor-activated slide program about dinosaurs. A background mural, foliage, graphics and a colorful geologic time line provide atmosphere and information for visitors.