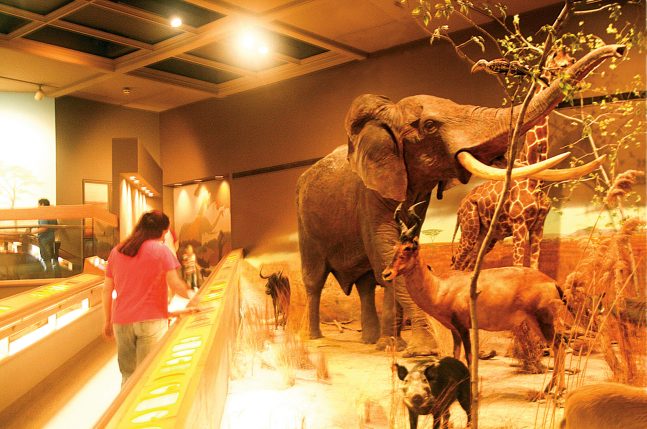 The multi-level R.E. Phelon African Hall opened in 1981 with exhibits that highlight the diversity of Africa’s wildlife and peoples. Visitors travel through the hall along a winding ramp that leads them past life-like environments that are home to a variety of mounted animals, including a huge African bush elephant, a giraffe, rhinoceros, wart hog, chimpanzee, zebra, leopard and several types of antelopes. The recorded calls of birds and other animals help to re-create the atmosphere of the African plains. Along the ramp that leads visitors to the upper level of the hall, exhibits about evolution introduce Africa’s human contributions to the world. Upstairs are authentic artifacts from several traditional African cultures, displays about modern Africa, and an exhibit about prominent Springfield African Americans. Interactive elements in the hall include and audio-visual presentation and “please touch” materials such as animal hide and tracks.