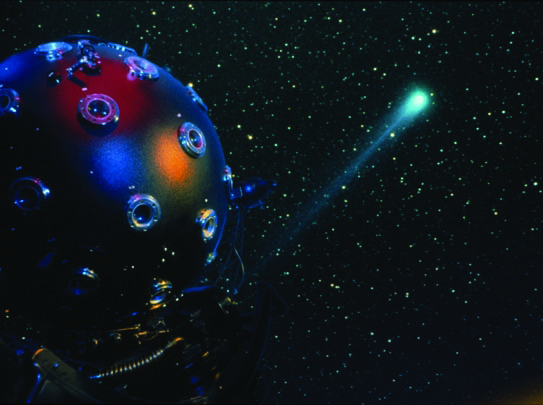 In addition to introducing generations of Springfield residents to the wonders of the night sky, the Korkosz projector in the Seymour Planetarium stands as an example of Springfield ingenuity, right here at the Springfield Science Museum.

The Zeiss company manufactured the first planetarium projectors in Germany in the 1920s. By the 1930s, four of their projectors were in major US cities: New York, Chicago, Philadelphia, and Los Angeles. However, these machines were expensive and beyond the means of a small city such as Springfield. So Frank Korkosz, a technician who worked at the Springfield Science Museum, decided to make a projector of his own with help from his brothers John and Stanley, and with the full support of the Museum administration.

While ours was still being constructed, and before we opened our planetarium in 1937, the Rosicrucian Order in San Jose had built and operated another projector, making theirs the first and ours the second to be made in America. So our projector and planetarium were the sixth ones overall in the country, giving our small city bragging rights of its own. All of those other projectors have since been replaced, leaving ours as the oldest operating American-made projector in the world.

The Springfield Museum’s Korkosz projector and planetarium have served as inspiration and provided education for many thousands of people of all ages ever since! But over the years, there were some changes made to our planetarium. The old, wooden, folding chairs were replaced with plastic bucket seats; a dark green wall-to-wall carpet was laid down – on the floor and the walls! We added a sound system and a bank of 35mm slide projectors to create what was then a state-of-the-art multi-media experience.

Now, we are in the midst of the most exciting evolution of all. Not only are we renovating the theater with all new, plush, chairs and carpet (though not on the walls, we promise), we are restoring our historic star projector to its original configuration. Over the years, it too had experienced some changes, with various auxiliary projectors having been added to, for instance, simulate planetary motion. We will return to the ingenious simplicity of the “starball” as the Korkosz brothers built it.

The work to renovate our planetarium is progressing nicely. We removed the old 35mm projectors, dark green carpet, and the barricade that once surrounded the starball and shielded much of it from view; our dome has received a fresh coat of paint, a new control console is being designed and built by our talented staff, and with the help of dedicated volunteers the starball itself will undergo its cleanup and preparation for another generation of service.

Sometime after the reopening of the planetarium, we will enhance our programming with an all-digital, full-dome, video projection system. Springfield’s innovative starball, which is now the world’s oldest operating American-made star projector, will remain at the heart of our historic planetarium and astronomy education in Springfield. A brilliant future, indeed!

Here is a 360 degree visualization of the planetarium made shortly before it closed for renovations. (Works best in the Chrome browser.)

The Migration of the Wildebeest

The International Space Station Exhibit is Soaring Along