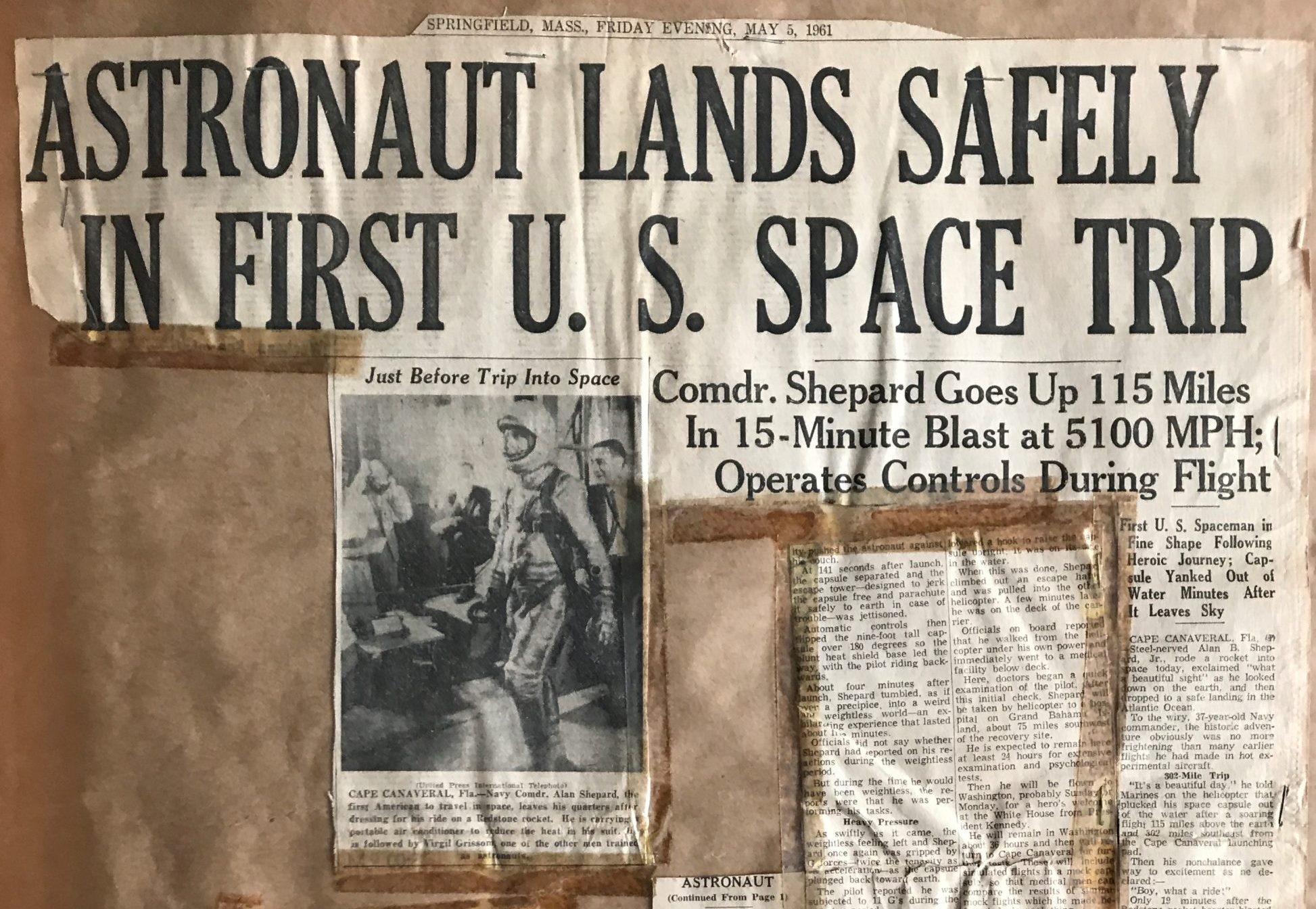 I was in half-day kindergarten at Memorial School (now Mary A. Dryden Veterans Memorial School) in Springfield when President John F. Kennedy was assassinated in 1963.  Prior to his death, I remember his press conferences on our black-and-white TV pre-empting an afternoon children’s show called “Captain Kangaroo.”

But it was President Kennedy who laid down a national priority two years earlier, in May 1961, when he told Congress that the United States should “commit itself to achieving the goal, before the decade is out, of landing a man on the Moon and returning him safely to Earth.”  His speech came:

Every rocket launch of the human space program was headline news in Springfield newspapers in the 1960s, including the six-crewed Project Mercury launches of single-person capsules 1961-1963, and the ten-crewed Project Gemini launches of two-person capsules 1965-1966.  Like a lot of 1960s pre-teens, I wanted to become an astronaut.  When I was about six, my parents gave me light blue astronaut coveralls with zippered pockets everywhere.

There were family visits to the Science Museum.  I remember the planetarium, Sam the elephant, and the aquariums.  In college I would learn celestial navigation, which involves using a sextant and some other instruments to determine one’s position using the sun, moon, planets, and stars.  I wasn’t a math whiz, but liked geometry and trigonometry – they were visual.

In Cub Scouts in Springfield around 1966, I assembled an over-sized scrap book on the space program.  Fortunately my mother saved old newspapers with headlines of important events, stacking them in a barrel in our basement, so I had material available.  My father helped by cutting two pieces of wood peg board to serve as front and back covers.  For several years I updated it, through the flash fire on Apollo 1 and the first launch of a crew in the Apollo program’s three-person capsules 1967-1971.

Now I’m retired, have no children, and wondered what to do with it.  I didn’t want to toss it in a dumpster.  The headlines give a glimpse of geo-politics that helped make the space program a national priority.  They show how the U.S. advanced from confirming humans could survive in space, work outside a spacecraft, and dock one craft with another.  Those achievements enabled moon landings, space shuttles, the building of the International Space Station, and Russian-American cooperation in space.  Museum staff agreed that headlines like those below could help tell the story:

Although my astronaut dream faded with time, I did practice celestial navigation at sea while serving as a naval officer for several years.  In December 2020 I retired as a civilian senior executive with the Navy’s Military Sealift Command, which operates 125 support ships with civilian seafarers.  I managed our seagoing workforce of 6,500 and led a shore staff of 130.  Although I never circled Earth in space like astronaut John Glenn, I was fortunate to fly eastward around the world in 2019 with our Admiral, visiting our personnel in Europe, the Middle East, and across the Pacific.

Springfield is fortunate to have five museums lining the Quadrangle, like the Smithsonian museums line Washington’s the National Mall.  The Science Museum can excite people with examples of what students who pursue education in science, technology, engineering, and math (STEM) can achieve for society, when imagination is thrown in.  If a 1960s scrap book helps the Museum tell that story, I’m grateful.  Each new generation invents, builds, discovers, and achieves new things, standing atop discoveries and knowledge of those who came before them.

Michael Morris is a Springfield native and former naval officer.