September 15 – October 15 is National Hispanic Heritage Month in the United States. We participated by featuring Hispanic artists from our collections on social media and as part of the Treasures at the Springfield Museums series in the Sunday Republican. We are lucky to have a number of works in our collection by Hispanic artists. Here are three: 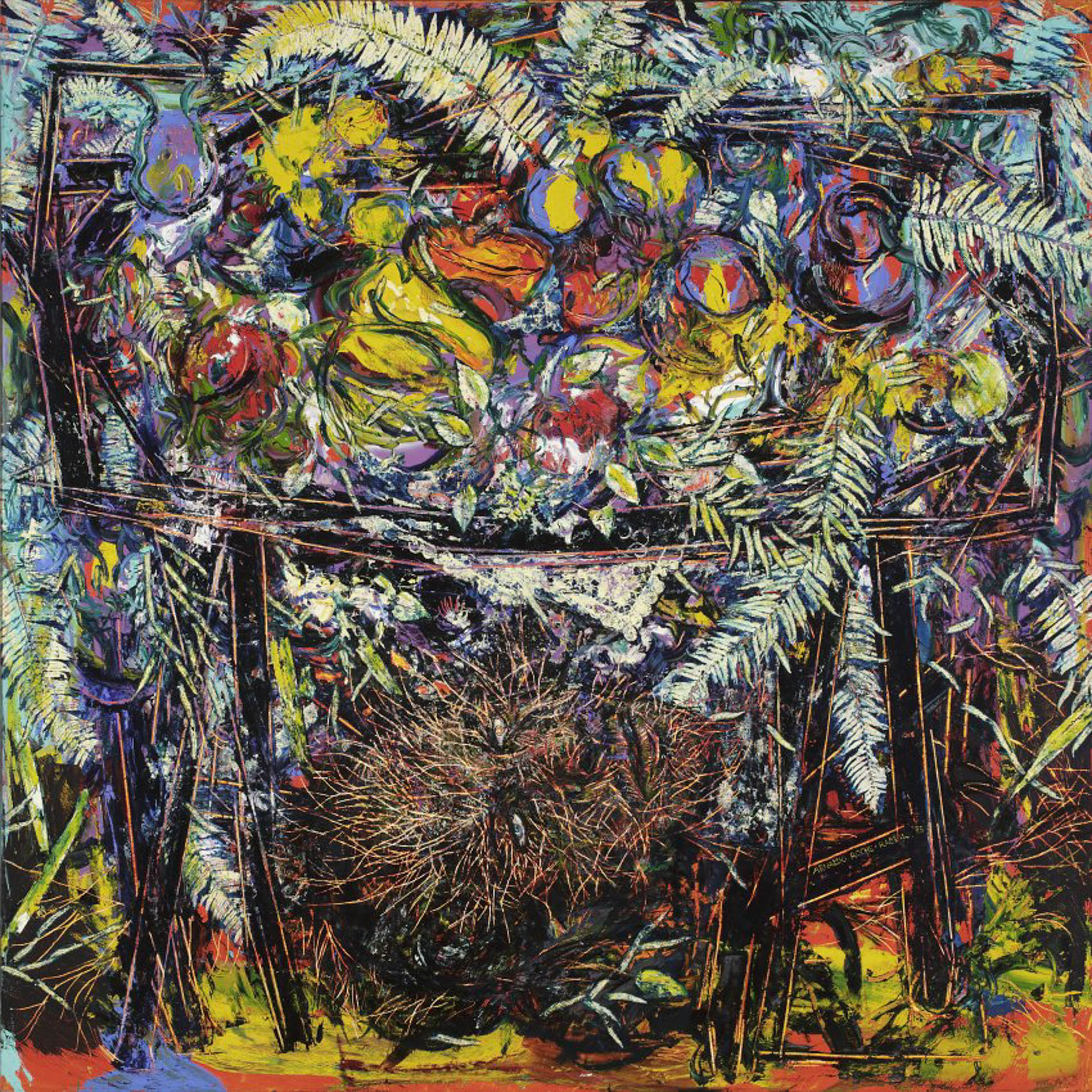 Fall from Grace is an encaustic and oil on canvas work by Arnaldo Roche-Rabell (Puerto Rican, 1955-2018) and currently hangs in the Contemporary Gallery in the D’Amour Museum of Fine Arts. Roche-Rabell was influenced by Neo-Expressionism and is considered one of the most important painters of the movement. This introspective self-portrait shows a table overflowing with luscious tropical fruits and ferns, reminiscent of Puerto Rico, and a disembodied head staring upwards. One eye in the portrait is blue and the other brown, referring to the bicultural tension of living in both Puerto Rico and the United States. The blue eye symbolized his life in Chicago and the brown eye his Puerto Rican heritage. He has said about his self-portraits, “I want to scratch out my own face in the paint to find out who or what I am.” 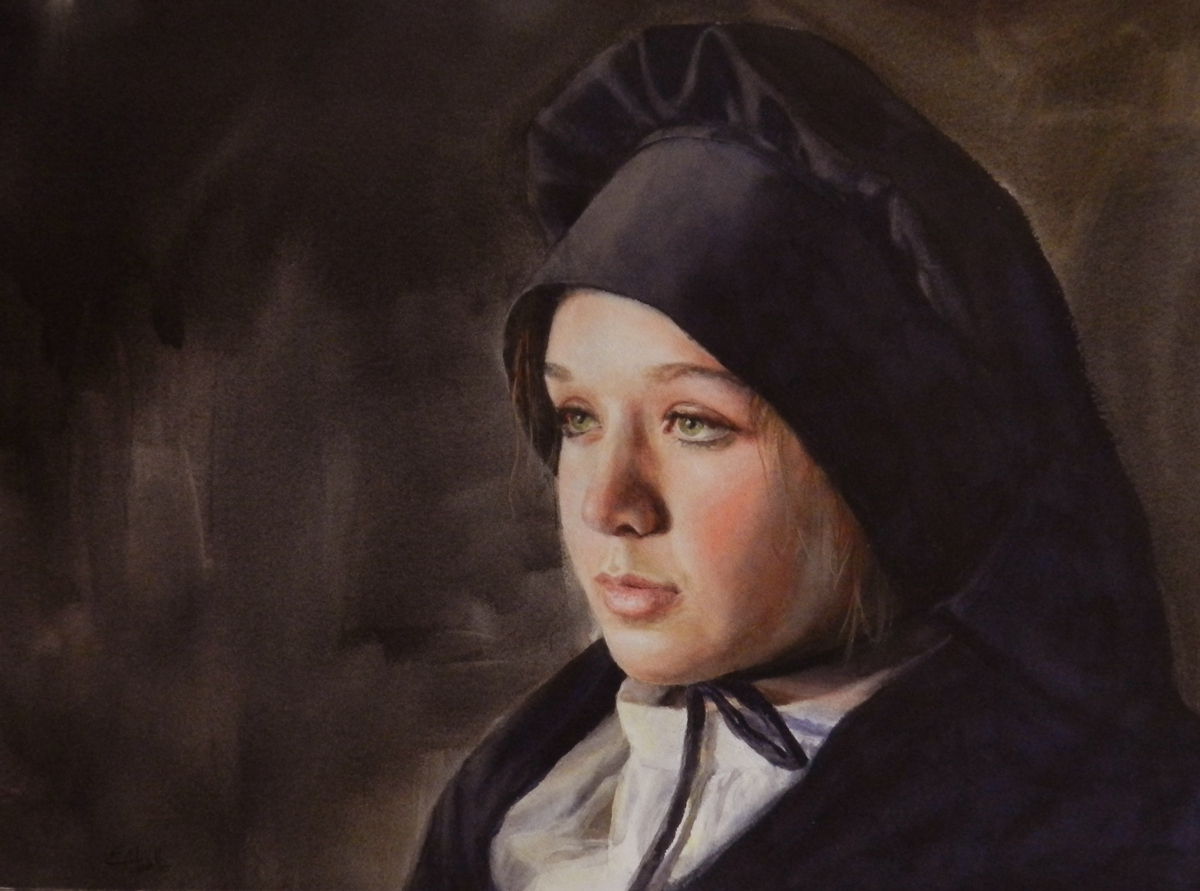 This watercolor by Edgardo Abello (Columbian-American, b. 1961) portrays the artist’s daughter Gabriela (2014) and joined the collection of the D’Amour Museum of Fine Arts after it was exhibited in 2014. Abello was born in Barranquilla, Colombia and always enjoyed painting and drawing. For practical reasons, his father steered him in the direction of architecture and he came to the United States to study architecture in 1978. After many years of successful work in the architectural rendering business, Abello decided to dedicate himself to the kind of painting he always knew he was capable of but never had the time to complete. His beautiful works are achieved through his appreciation and understanding of color and light and also because of careful study of the subjects he paints. 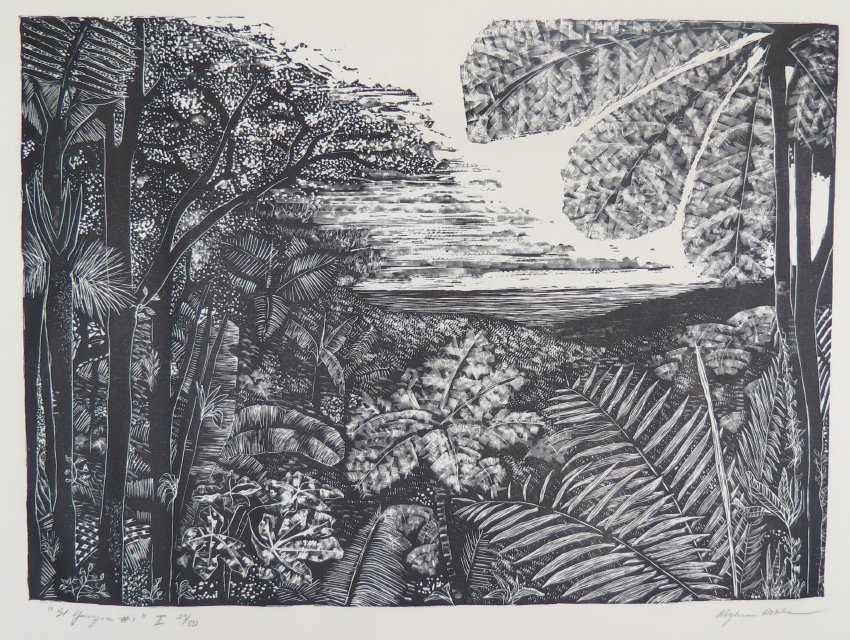 This engraving, El Yunque #1 (1988), is by Myrna Báez (Puerto Rican, 1931-2018). Báez was a painter and printmaker and is considered one of the most important visual artists in Puerto Rico. The Puerto Rico Herald has claimed that her “art defines the island’s reality in the second half of the 20th century.” Báez’s early work has been described as “traditional images of Puerto Rico” and she often depicted images of everyday life that included Puerto Rico’s working-class. While studying in Spain, she learned engraving and lithography techniques and was influenced by Impressionism, Surrealism, and abstract art. Nature takes center stage in this engraving which depicts El Yunque National Forest in Puerto Rico. While the image is black and white, the rich, varied, and abundant textures captured by the artist allow viewers to imagine the dense, colorful scene as if standing there themselves looking out to the sea.