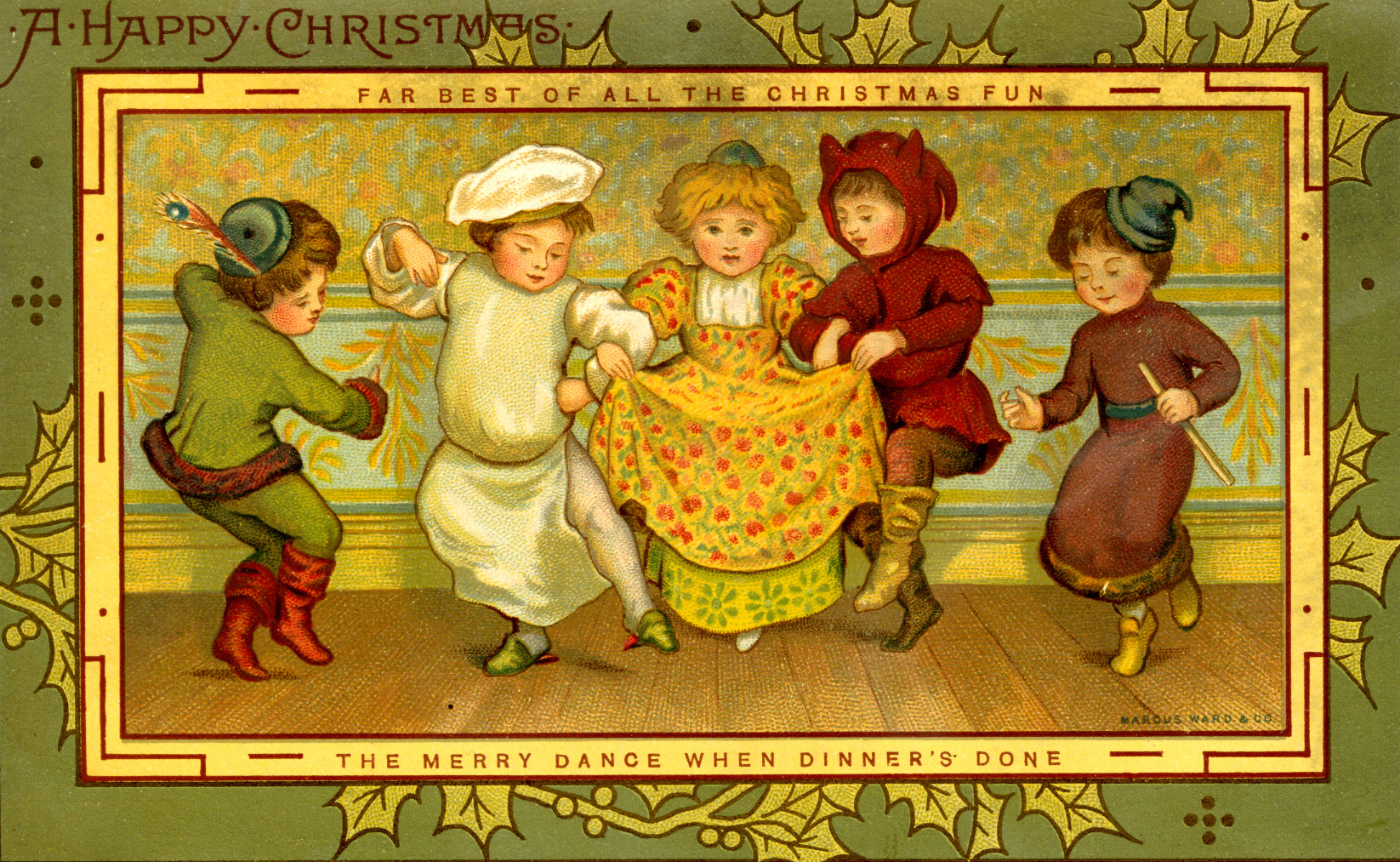 [Daniel Webster Punch] is definitely for stay-at-home consumption only. Maybe it should be re-named Pandemic Punch!

With December here, many of us find ourselves re-thinking how to celebrate the holidays this year. While concerts and get-togethers, dining out, and shopping in person are activities we have to weigh against the risks, cooking and baking at home are solitary or family friendly pursuits we can take on to feel festive and creative. And who doesn’t love to eat something homemade, and a little special! In search of inspiration I decided to take a look for holiday recipes from the past in the small collection of local cookbooks we have in our library and archives at the Wood Museum of Springfield History.

The December 1896 issue of Good Housekeeping Magazine, which was first published right here in Springfield, gives a recipe for fruit cake, directing the cook to combine large quantities of dried fruit with ten eggs, two wineglassfuls of brandy, one pound each of flour, butter, and sugar and some spices, all to be baked in one large round tin or two bread pans from two to three hours. These terse instructions sound rather daunting when compared to today’s recipes, especially since they give no information about oven temperatures!

The Soft Ginger Cookies from A Practical Cook Book compiled by the Ladies of the Eastern Hampden Medical Association shows that things hadn’t really moved forward much by its publication date of 1914. It says: One cup molasses, ½ cup of butter, 1 of cold water, 1 heaping teaspoon soda, 1 qt. flour, ginger and salt to taste. Drop on tins and bake in a quick oven. The ingredients seem familiar but the method leaves us wondering how to go about getting the baking right!  I was able to find that the terminology of stove temperatures is rather elastic. A slow oven is 300 degrees, a moderate oven is between 325 and 375 degrees and a hot or “quick” oven from 400 to 450 degrees.

By the 1930s a lucky housewife might say goodbye to the ice man who delivered blocks of ice once a week. She could own a mechanical ice box, aka the mechanical refrigerator.  The home cook could try her hand at making cold mousses, icebox cakes, sherbets and ice cream. For over a century Forbes & Wallace was one of Springfield’s premier department stores on Main Street.  Its 1932 Forbes & Wallace Cook Book and Kitchen Guide for the Busy Woman featured a recipe for Peppermint Ice Cream without the need for an ice cream maker.

Dissolve the gelantine in water. Dissolve the candy in the milk in a double boiler. Add the gelantine. Chill. Whip the cream. Add the cream to the chilled mixture. Place in a refrigerator pan. When frozen to a mush, stir. Stir twice at half hour intervals. Continue freezing without further stirring. Serves 6. 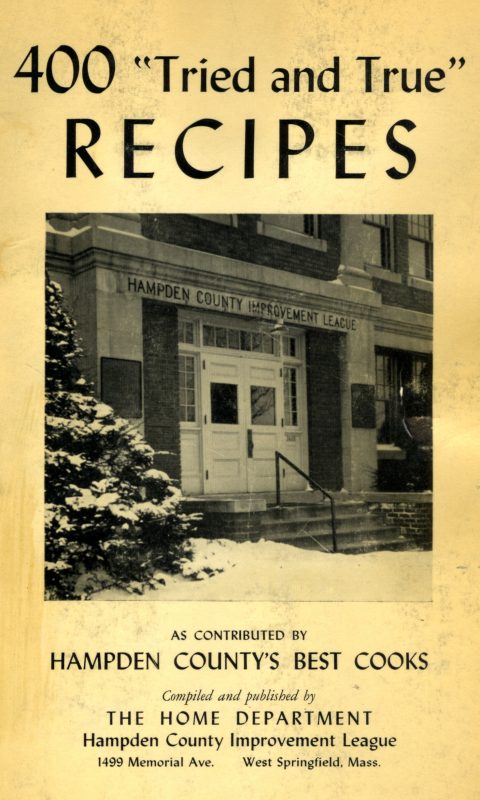 In 1948 the ladies of Hampden County were contributing their recipes to a cook book published by the Home Department of the Hampden County Improvement League, and the 400 “Tried and True” Recipes contained more complete and modern instructions, including oven temperatures – most of the time – with the exception of fruit cake recipes, which still only said “bake slowly.”

Mix shortening, molasses, and egg. Sift dry ingredients and add to first mixture. Then add hot water and stir until smooth. Pour into a shallow pan and bake in 350 degree Fahrenheit oven for 35 minutes.

To celebrate Springfield’s Centennial year as a city in 1952 the ladies of the Centennial Committee put together a commemorative cookbook, using the notation “ofr” to denote an old family recipe. This was an undertaking that must have involved some serious social jockeying, and a list of the city’s century of municipal officials and old families appears in the back of the book with genealogical notes proving the pedigree of the recipe contributor. Along with “ofr” recipes for spice cakes and fruitcakes, again with no baking temperatures given, a recipe appears for a startlingly stiff Daniel Webster Punch, described as an authentic recipe from the good old days. It may have been the drink of choice for many of these ladies, recently returned from a Committee meeting! It features copious amounts of liquor, including 2 quarts of brandy, 2 quarts each of Claret and Santa Cruz rum, 2 pints each of Grenadine and Benedictine, and two bottles of champagne. Two dozen juiced lemons and 2 pounds of sugar were added. Its final instruction says “no ice in the punch.” This is definitely for stay-at-home consumption only. Maybe it should be re-named Pandemic Punch! 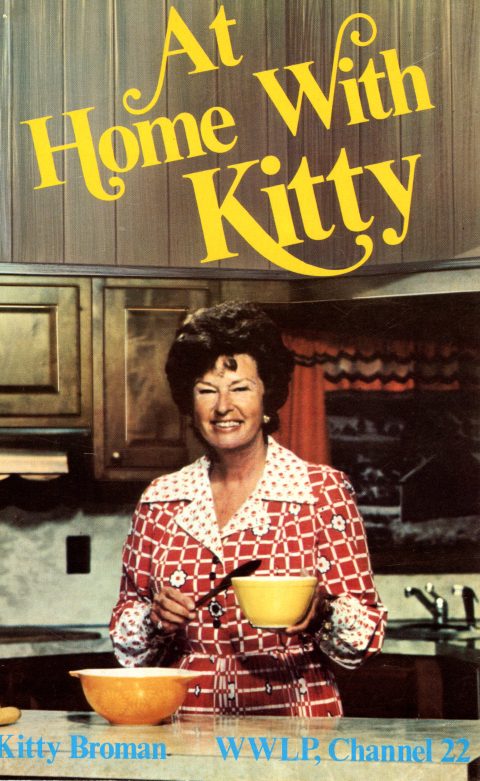 One of my favorite local cookbooks was created by Kitty Broman, the legendary hostess of her own popular TV show “At Home with Kitty” which aired for thirty years on WWLP, Channel 22. Although most of her program involved interviewing guests she also did live segments where she cooked on the set, handling all unexpected kitchen mishaps with aplomb.  Her recipe for eggnog pie appeared in her 1972 cookbook named after her show. It’s just one of a number of her holiday recipes, but looks like a festive option for spending an afternoon in your own kitchen with some holiday music on the IPod.

Church cookbooks have long been popular fund-raisers, and our collection has some of these. The recipes don’t vary that much over the decades – there are almost always contributions of chocolate cakes and fruit pies, gingerbread, and cookies and bars of every persuasion. Certain ingredients capture an era – desserts using  Jello, Cool Whip or packaged pudding cake mix transport me straight back to my days as a newly-wed. My wedding shower in 1976 featured dishes using all three! I found a cookbook from Christ Church Cathedral, our Quadrangle neighbor, called A Taste of the Cathedral Cookbook. It features a recipe for Scottish shortbread, which was always a Christmas favorite when I was a kid. It was contributed by Elizabeth Burnett, an elderly Scottish parishioner I remember fondly. She was a wonderful baker, with twinkly eyes and a cheery Scottish burr. She lived to be almost 103 years old. This is on my personal must-try list.

Keep hands cold! Work sugar into butter by hand. Now work in the flour by hand until smooth. Roll mixture into a 9” x 13” cookie sheet. Cut into squares and using a fork, prick the squares a couple of times before baking. Bake at 375 degrees until golden. 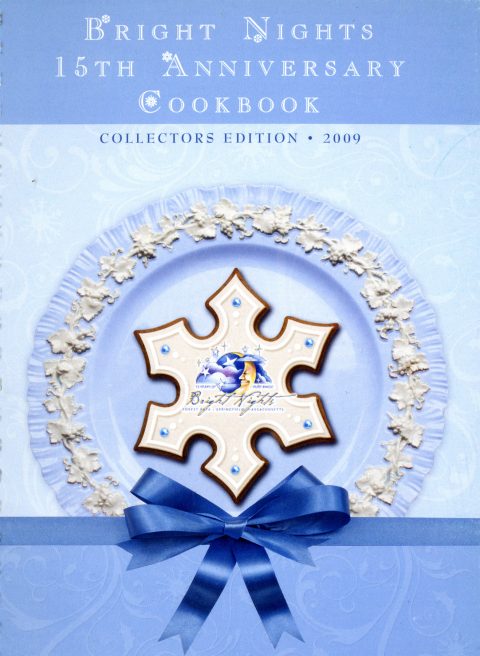 I’ll finish off with a recipe from The Bright Nights 15th Anniversary Cookbook, which came out in 2009. There are so many tempting choices in this cookbook I hardly know what to pick. I think I’ll go with the cookie-cutter, kid-friendly recipe for Christmas Cookies from Molly Sullivan of Springfield.  Since Bright Nights visitors can’t visit Santa in person this year maybe you could have your Bright Nights-approved Christmas cookies and cocoa at home, and don’t forget to leave a plate of cookies out for Santa.

Sift together flour and salt. Cream butter and cream cheese together. Gradually add sugar to butter mixture and mix well. Beat in egg yolk and vanilla. Add flour mixture. Chill dough well – at least 4 hours, or overnight. Preheat oven to 350 degrees. Roll dough on a floured surface. Cut cookies with cookie cutters and place on cookie sheets. Bake 10-12 minutes, until cookies are light brown around the edges. Cool on a wire rack. Decorate if desired and store in airtight containers.

I hope this inspires you to get cooking and crank up those Christmas carols. And if you have local cookbooks at home please think of donating them to the Wood Museum’s collection.  That would give us something else to be grateful for this holiday season.

Written by Maggie Humberston, Curator of Library and Archives at the Springfield Museums.

Help Us Continue a Winning Streak