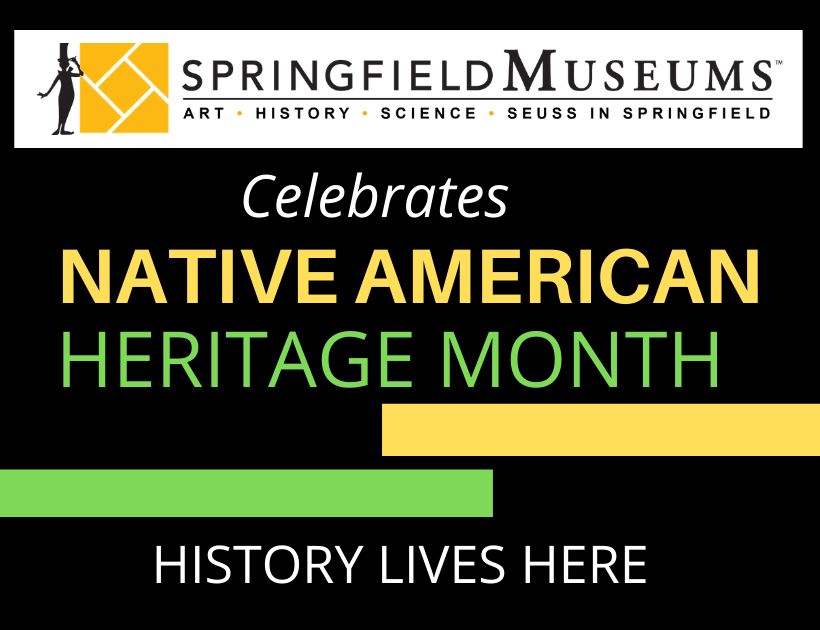 The Springfield Museums would like to first begin with a land acknowledgement. The Museums are located on the traditional land of the Eastern Algonquian peoples–including the Pocumtuc, Agawam, Nipmuc, and Nonotuck–and we honor with gratitude the land itself and the people who have stewarded it throughout the generations and continue to steward it today. In the United States, we all stand on Native land in a country still shaped by a history of slavery and by racism. We gratefully acknowledge those who have come before us and those who continue to fight injustice today.

Native American Heritage Month is celebrated throughout the month of November. In celebration, the Museums highlighted pieces by and about Native Americans across social media platforms, and in the weekly series Treasures at the Springfield Museums in the Sunday Republican. Below you will find three different examples of the content shared throughout the month. Follow us on Facebook (@SpringfieldMuseums), Instagram (@SpringfieldMuseums), and Twitter (@SpfldMuseums) for more!

Soapstone Carving of a Seal

This soapstone carving of a seal was made by an Inuit artist in Arviat, Nunavut around 1983. Seals are a central part of Inuit life and a key source of locally harvested food. Traditional Inuit carvings, practiced before contact with Europeans, were primarily used in rituals or in the creation of amulets. Made from bone or ivory, they remained small due to the nomadic nature of Inuit life.

When Europeans began trading for Inuit objects, and a market for them developed, the nature of the carvings changed, and the Inuit began to create art that was intended specifically for trade.

As a result, the pieces became larger, since they were not designed to be carried for great distances, and as demand increased, the tradition of using ivory became too difficult to maintain. Since the 1940s, Inuit artists have worked with stone, usually soapstone or serpentine, with ivory used only as accents.

Today, Inuit artists continue to carve using files and axes instead of power tools. Art reflects the lives, values, and interests of the contemporary Inuit, as with this soapstone carving of a seal.

In 1967, Fritz Scholder (Native American, 1937-2005) began a series of works that would define his career. Scholder, who was one-quarter Luseino (a California Mission tribe)  set out to create images of “real” Native Americans that pushed back against the stereotypical and romanticized imagery that had dominated the late 19th and early 20th centuries. This lithograph, “Bicentennial Indian” (c. 1975), was part of the series.

Commissioned for the nation’s bicentennial, the portfolio included works by twelve important American artists who incorporated ideas about nationality and independence into their artwork.

Discussing this lithograph, Scholder explained that, “The Plains Indians of the late 1800s often incorporated into their traditional dress surplus American flags which they discovered in reservation commissaries. In these garments the old chiefs were frequently brought to photography studios where, with props such as Victorian chairs, their pictures would be taken.”

This traditional canteen, used to carry water while working in the fields, was made by Nampeyo (1859-1942), and has been part of the Springfield Science Museum collections since 1982.

Nampeyo was a Hopi-Tewa potter who lived on the Hopi Reservation in Arizona. Nampeyo was taught by her grandmother and by the time she reached adulthood, was considered one of the finest potters in her region. She is credited with the renaissance of Hopi pottery at the turn of the 20th century. Nampeyo made traditional “Polacca” or crackle ware pottery, and was so fascinated by the smooth yellow pottery if the prehistoric pueblo of Sikyatki, that she experimented with a variety of clays and paints in an attempt to recreate it.

When archaeologists excavated one of the Sikyatki ruins in 1895, they found about 500 pieces of pottery. Nampeyo and her husband Lesou copied as many of the designs as they could, which allowed Nampeyo to incorporate them into her own work. The production of the Sikyatki-themed pottery triggered the Sikyatki Revival, as Nampeyo’s pieces were an instant success.

Remembering Pres Blake, a Great Friend to the Museums