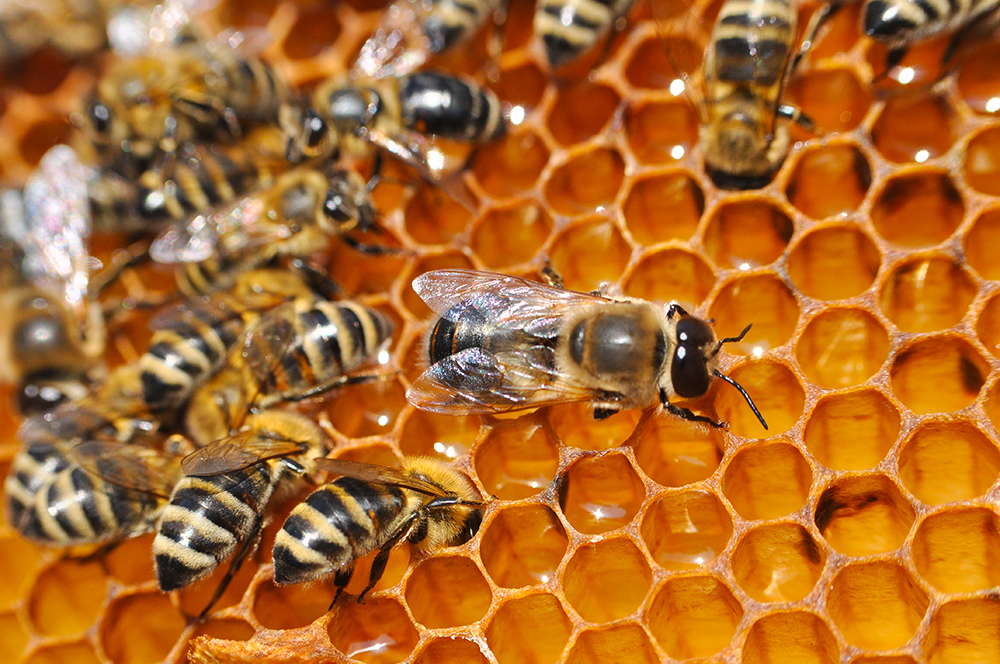 How do honey bees, Apis mellifera, make decisions? Well, in a democratic congress of bees, each individual bee submits information and the whole colony makes a decision based on the findings of the group.

Recently, the honey bee colony at the Springfield Science Museum decided for some reason to abandon their hive and move to another location. They had been living (and thriving) in the Museum’s observation hive, but together they made the decision to move on and establish another hive someplace else. This behavior is known as “absconding.” Before absconding, bees will consume all the honey that they have produced, which is one way we know, for example, that the colony didn’t collapse. Absconding is natural but unexplained behavior.

Why would the honey bees leave their home in the fall before the onset of winter, when it would be difficult to survive in the wild? We do not know for certain why they would make this decision; however, we do know that this behavior often happens in the fall.

Absconding could be associated with the bee colony growing too large for its current hive, a disease organism, environmental changes in temperature or humidity, lack of outdoor forage foods or water, exposure to smoke or chemicals, or other insects such as bees or ants invading their hive. For whatever reason, or combination of reasons, our bees decided their best chance of surviving the winter was to leave the observation hive for someplace new and improved. This decision was based on information gathered from all of the individual bees working in their different roles and functions to keep the hive viable. When a group of bees does this, the whole colony functions as though they are a single organism. A bee colony can be termed a “superorganism.”

The majority of bees in the hive are females, which have different roles depending on their age. Female worker bee roles include young bees which clean the hive, and older bees which feed larvae, produce honey, store pollen, maintaining the hive through wax production, serve as entrance guards, and feed the queen. When male bees are born into a colony, they soon leave the hive in search of a queen. The queen’s role is reproduction which maintains the entire hive population.

As female worker bees mature, they become field bees and venture away from the hive to forage for pollen, nectar, water, and propolis (antimicrobial tree resins). Field bees may also serve as scout bees. One thing a scout bee might do is determine the size of a potential new nesting site. The scout would fly inside a tree cavity, take some measurements, and return to the hive with the critical information. Information is transferred through movement patterns called dances, which also incorporate smells, chemical cues, and pheromones into an effective language for bees.

Bees might choose a wild nest cavity- over an observation hive. A wild nest (perhaps a cavity in a tree) would offer many advantages over the observation hive.  These would include a small opening that is high off the ground and easy to defend, an optimal cavity size that’s smaller than most commercial bee hives, thicker hive walls which the bees would cover in propolis, diversity of natural diets and pollen sources, and less exposure to chemicals. Also, the colony would not be easily disturbed.

Observation bee hives, although smaller than agricultural hives, offer opportunities to study the natural behavior of honey bees. Observers can see exactly how the hive functions, and begin to understand the challenges honey bees face in the wild and in agricultural hives. Besides the invasive ectoparasitic mite, Varroa destructor, which carries a virus that causes bee colonies to collapse, bees also experience exposure to chemicals and insecticides, environmental changes, and lack of suitable habitats containing native pollinator plants.

Almost 50% of agricultural crops worldwide are pollinated by honey bees, and our observation hive helps us understand the natural history, social behavior, and ecological importance of these amazing animals.

Daniel Augustino is the Aquarist at the Springfield Science Museum. He can be reached at daugustino@springfieldmuseums.org.

A Close Look at Camille Pissarro’s Winter, the Outskirts of Lower Norwood