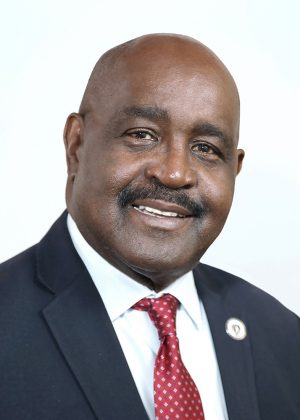 Representative Bud L. Williams, a lifelong resident of Springfield, Massachusetts, exemplifies community service through his devotion to civic duties, his unflinching advocacy for the people he represents, and his unrelenting activism seeking social justice for all people.

A graduate of Putnam High School, where he demonstrated academic success in the classroom and demonstrated good character and sportsmanship on the basketball court, Rep. Williams received accolades and offers from many colleges but chose to continue his education in Springfield so he could also care for his mother and younger siblings.

He continues to lead the charge for Black men and men of color, encouraging them to step up and dignify the roles to which they have been assigned in society.

After earning a Bachelor of Education degree from Springfield Technical College and Westfield State University, Rep. Williams continued his studies to earn a Master of Education degree from the University of Massachusetts. As an elementary school teacher and later as a probation officer, he helped many young people establish positive life goals. “Bud Williams has been a major asset to Springfield. This starts with the youth and extends to the elders,” said nominator Dr. Bobbie L. Rennix.

“His fight to keep banking services in our community has been a true blessing to the entire community. Mr. Williams works hard to make Springfield a safe and good community for all of us living in the city. He is an advocate with a ‘heart of gold’,” said  another nominator Mary B. Moore. Rep. Williams was instrumental in stopping TD Bank from closing the Mason Square bank branch—a closure that would have negatively impacted poor and underserved residents, particularly senior patrons. “He is a champion for justice,” said nominator Mary A. Worthy.

“He genuinely cares about the welfare of people within his sphere of influence,” said nominator Willette H. Yarbrough Johnson. “Despite the busyness of his work as a State Representative, Bud finds time to check in with his constituents and hear their concerns.” Johnson added: “Through his affiliation with The Black Men of Greater Springfield, The Brethren, Omega Psi Phi Fraternity, Inc., just to name a few, he continues to lead the charge for Black men and men of color, encouraging them to step up and dignify the roles to which they have been assigned in society.”

Rep. Williams’s fight to address the injustices of subpar housing and support for displaced residents of Bergen Circle housing complex is another example of his work on behalf of the community. Rep. Williams assisted the elderly, providing transportation, and making certain that residents were treated with dignity as they sought out shelter and other services. “Bud works tirelessly on behalf of the entire Springfield community as he addresses issues that may negatively affect the health of the community. He is unafraid to speak out in the face of adversity for the betterment of the community-at-large,” said nominator Robert Cee Jackson.

Williams continues to demonstrate his strength making a significant contribution to positively impact the quality of life in the Springfield region. Representative Bud L. Williams is a champion for justice and a healthy community.

True to the Swahili word that comprises its name, the Ubora Award recognizes an adult of African heritage who exemplifies excellence in their commitment to creating a better community through service.

The African Hall Subcommittee is a volunteer group comprised of educators, business people, and community leaders from the African-American community. The group has administered this annual award since 1992.

The Ubora and Ahadi Youth awards will be presented at a ceremony at the Springfield Museums in the fall. For additional information, please call 413-314-6418, or email to vcavagni@springfieldmuseums.org.

Join Our Team – Become a Docent!