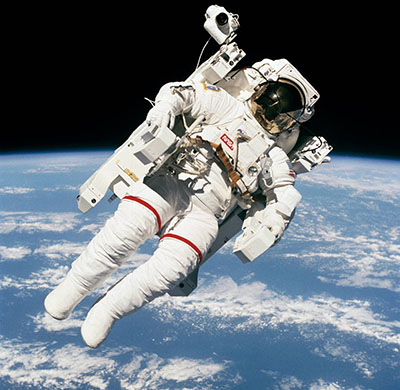 DID YOU KNOW? The formal name for the space suit used on the space shuttle and International Space Station is the Extravehicular Mobility Unit, or EMU. “Extravehicular” means outside of the vehicle or spacecraft.  The space suit protects the astronaut from the dangers of being outside in space.

Word got around the Springfield Museums quickly—“The space suit is here!” Many of us found our way to Astronomy Hall in the Science Museum to witness the new acquisition which would be a part of our International Space Station exhibit—set to open soon.

The spacesuit—a replica of the EMU used by American astronauts—is the gift of Joel Cummings, a space enthusiast who is a docent at the Science Museum and at the Smithsonian Air and Space Museum. Joel is giving a lecture during Museums a la Carte this fall. Meantime, Joel wanted to share some of what he has prepared for the lecture to help spark curiosity and wonder!

Today’s space suit (EMU) is a garment worn to keep astronauts alive in the harsh environment of outer space, such as the vacuum of space, low to medium levels of radiation, temperature extremes, and is necessary during an extravehicular activity (EVA) or spacewalk. 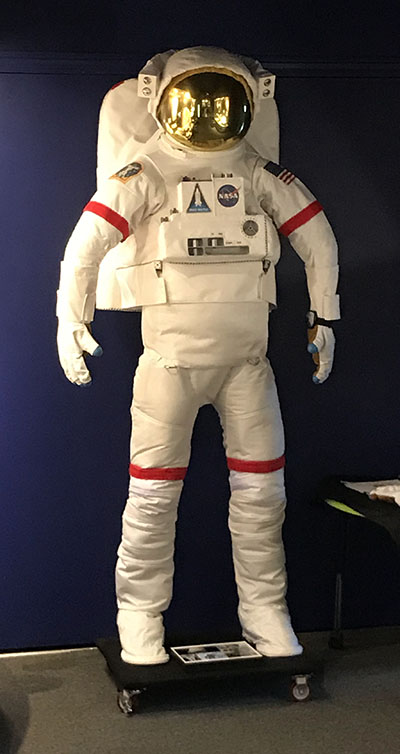 Modern U.S. space suits are complex and designed to protect astronauts from dangers such as micrometeorites, the extreme brightness from the sun, and temperature changes that can be as great as 500 degrees (-250F to +250F).

Besides covering the astronaut’s head, the helmet has a Ventilation Pad located behind the 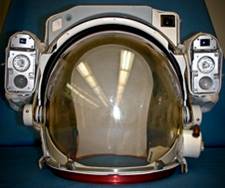 head which directs oxygen from the Primary Life Support System to the front of the helmet, working like a defroster. The visor is coated with a thin layer of gold that filters out the sun’s harmful rays. The helmet also has lights, cameras, and a Purge Valve which allows the astronaut to purge or vent the helmet’s atmosphere to clear the helmet of moisture or debris.

You can find a patch like the one pictured left on the right shoulder of every space suit. The stars on each patch represent the historic milestones in space walks or EVAs. 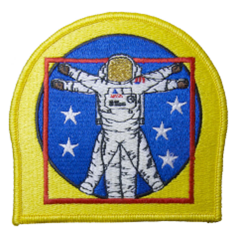 To learn more about the space suit, join us this fall for Joel’s lecture.