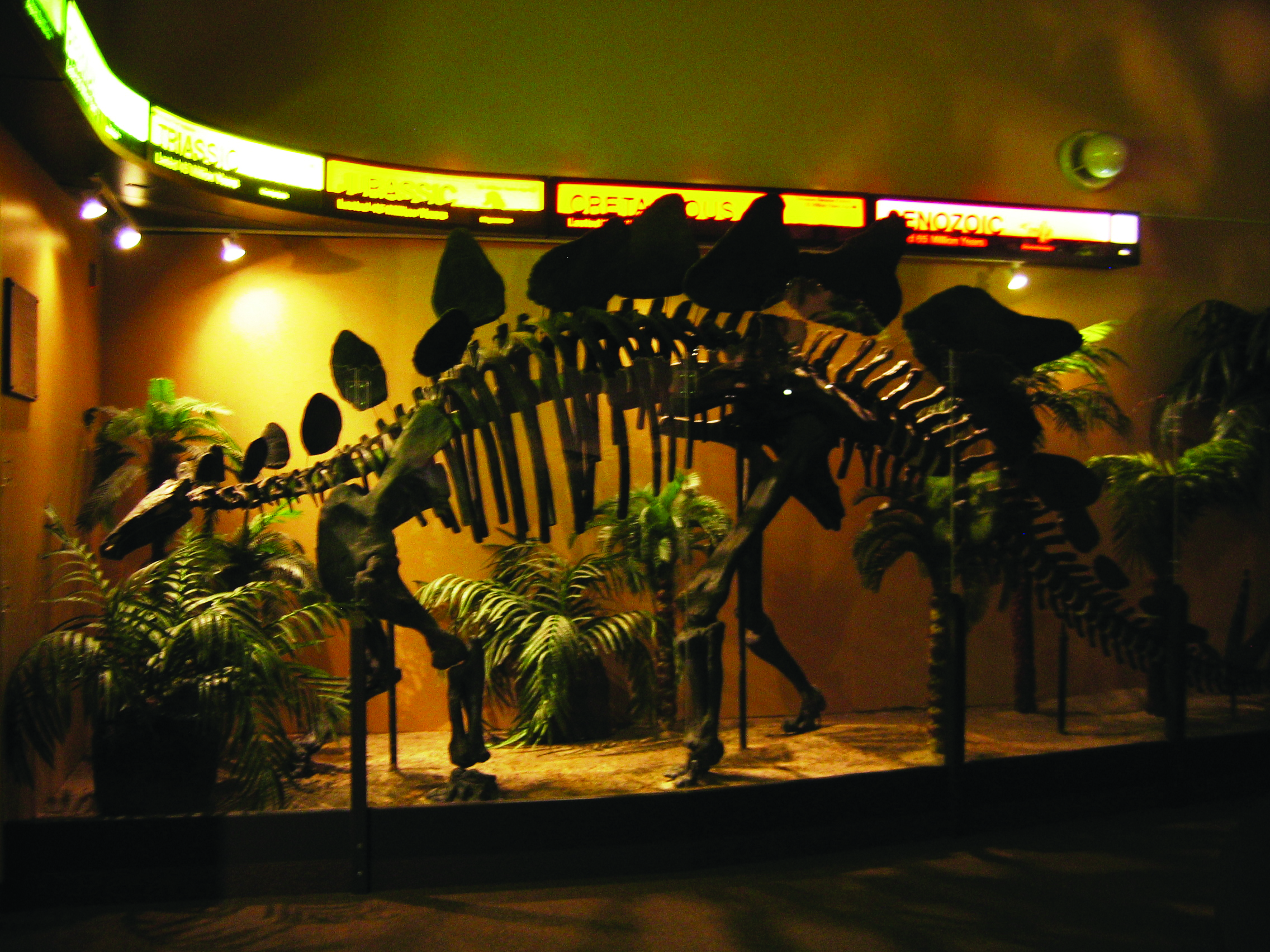 As you enter Dinosaur Hall you’re immediately drawn to the looming Tyrannosaurus Rex. Not only is T-Rex front and center, but he strikes such an ominous pose it’s easy to miss Stegosaurus, tucked against the wall, lingering behind glass in the low spaces. This skeleton of Stegosaurus is an exact replica.

While the two peacefully cohabitate in the gallery, the real life “roof-lizard” and Tyrannosaurus Rex never walked the planet at the same time—and that’s a good thing. Tyrannosaurus rex was equipped with pointy, serrated teeth, a powerful, pulverizing jaw, strong muscles throughout its tall, long body, and a voracious hunger for meat. On the other hand, Stegosaurus was a slow moving herbivore, happy just to be snacking on ferns. His wieldy tail absolutely no match for the monstrous, flesh tearing abilities of T-Rex.

So how much time did pass between these two’s time on earth? Both T-Rex and stegosaurus lived during the Phanerozoic Eon and the Mesozoic Era. However the Mesozoic Era is subdivided into three Periods: the Triassic, Jurassic, and Cretaceous. Stegosaurus lived during the late Jurassic Period, 150 to 160 million years ago. Tyrannosaurus rex came later during the late Cretaceous period about 145 to 66 million years ago.

Stegosaurus lived in an exciting time as the Jurassic Period was marked by radical changes on planet earth. First, the conglomerate land mass Pangea split and began its global migration. Earth experienced warmer temperatures and overall conditions allowed nature to diversify. Plants developed bisexual reproduction and simple moss and other basic vegetation were joined by new, complex species such as conifers and leafy greens. Variations in plant life allowed for variations in herbivore diets and Stegosaurus happily benefited from the new meals.

Mammals also appeared in the Jurassic Period but none of them challenged dinosaurs for the title of “Largest Creature On Earth.” Mammals at that time were in the early stages of evolution and remained small, unthreatening to anyone but each other.

The study of Stegosaurus’ anatomy brings up many questions about their physiology. Remember, anatomy is the structures of a being, physiology is the study of how those structures function within that being. So fossils can recreate the size and shape but without a living being to observe, function can be difficult to define. For example, how did such a large animal with such a small brain exist, let alone survive? What’s up with those spinal plates, what are they for? Just how dangerous was that tail? It’s fair to say that with the fossils and information we have to date, we’re supply side heavy with questions and a little low on stock with answers. But let’s talk about what we do know.

So while Stegosaurus was a relatively large dinosaur, measuring about the size of school bus, its brain was one of the smallest of its time, weighing in at a puny 2.8oz.6 Puzzled by this seemingly incompatible dynamic, scientists quest for how such a small amount of brain matter could direct body functions and still have enough tissue left over for plotting and pondering.

Today, science’s best offer is that Stegosaurus only needed to be smarter than its photosynthesizing food and aware enough to recognize and manage other threats; none of which were significantly smarter than Stegosaurus.

Next, note the spinal plates. In 1877, when Othniel Charles Marsh first unearthed Stegosaurus from the Colorado landscape, it was believed that the plates had lain flat on the dinosaur’s back making it more resemble its armored cousin, Ankylosaurs. This was also how it came to be incorrectly monikered the “roof-lizard.” But as paleontologists acquired and analyzed fossils, it became evident that the plates actually stood vertically and were most likely set in the dermal layer of Stegosaurus. That would account for plates being found near the body as opposed to attached to the bony prominences of vertebrae.

Science is also confident in its assessment of Stegosaurus’ tail. Thanks to an amusing nod by cartoonist Gary Larson, the tail is arguably the most famous part of Stegosaurus. In the early 80’s, Larson depicted a prehistoric R&D meeting attended by cavemen. While historically inaccurate it humorously identified the Stegosaurus tail as the “thagomizer” in honor of their now deceased pal, Thag Simmons. In a crazy twist, fiction became fact and the thagomizer tag stuck.

There is also no doubt of what exactly the thagomizer was capable. While there weren’t yet any humans to vaporize, the sturdy, spiky build of the appendage made it Stegosaurus’ main defense against predators, such as Allosaurus or Ceratosaurus.  In fact, an Allosaurus was uncovered with what appeared to be a puncture wound perfectly shaped for the clean insertion of a Stegosaurus spike. Because of this and other similar recent discoveries, it’s commonly accepted that the thagomizer was the most dangerous weapon ever evolved by a plant eater. Maybe Stegosaurus wasn’t so dumb after all.

So there you have it. Questions abound from head to thagomizer. However, science neither fears questions or waits for answers to appear—science earnestly searches them out. These are exciting times as the mysteries of today are soon to be uncovered by tomorrow’s excavations.

Lisa Carney is a science docent at the Springfield Museums.