By now many people have seen headlines online or on air about a “Christmas Star” and they wonder what all the hype is about. The event or “star” they refer to is the conjunction of the two largest planets, Jupiter and Saturn, as seen in our sky.

A conjunction is the close appearance of two objects as seen in our sky. A conjunction of Jupiter and Saturn is called a Great Conjunction. On the 21st, the position of the two planets in the skywill be only 1/10th of a degree apart. This is about 1/5th the apparent size of the full moon in our sky. The moon is about the same size as a pinkie finger held at arm’s length. The two planets will be visible together in the same view through a telescope, which is very rare. We will see them starting soon after sunset low in the southwest, and they will set about 2 hours after the sun.

The planets are not really near each other. Saturn is about twice as far away as Jupiter. We can see this in a couple of different views, one from Earth (the sky view), and one from an imaginary vantage point well above our North Pole (the solar system view). Both are from December 21 about 30 minutes after sunset.

Left: The view of the sky from Springfield, December 21 2020. The planets are so close together that the software renders them as a single object. Image courtesy Stellarium Solar. Right: The position of the planets in the solar system on December 21, 2020. Image Courtesy Celestia.

The solar system view shows that Saturn is well beyond Jupiter. They are along the same line of sight, so we see them together in the sky view, but they will not be physically near each other.

The solar system view does not give us a three-dimensional perspective. It shows us that the two planets are in the same direction. This happens roughly every 20 years. In many of these events however, one planet is still above or below the other by a full moon’s width (1/2 degree) or more. The planets were separated by over a degree on the conjunction of 2000 and will have a similar separation in 2040 and 2060. The 2080 conjunction will be similar to the one this year.

The angle between the yellow and red lines helps us see the other number hyped in the headlines recently: 800 years. The last time the planets were as close or closer than this year’s conjunction was in 1623. However, looking at a solar system view of that date shows that the planet-view line in red and the sun-view line in yellow were very close to each other. The event happened almost in line with the sun and was not visible because of the daylight. 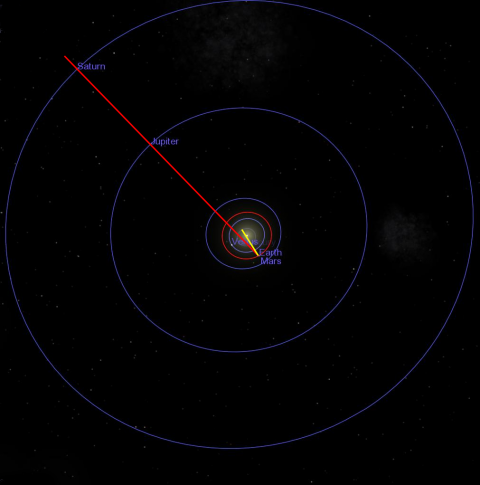 The position of the planets in the solar system on July 16 1623. Image Courtesy Celestia.

We have to go back about 800 years to 1226 to find a time they were  as close AND the viewing line was far enough away from the sun that they were easily visible. 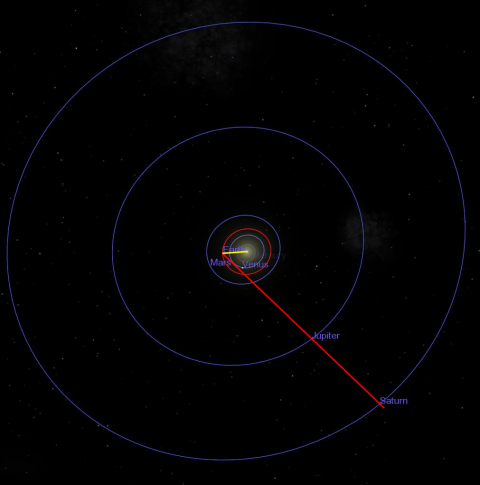 The position of the planets in the solar system on March 4, 1226. Image Courtesy Celestia.

If it is cloudy on the 21st, try the livestream from the Lowell Observatory in Arizona. You can also download the software used for the images, Celestia and Stellarium, and explore on your own.

Here’s hoping for clear skies wherever you are on the 21st!