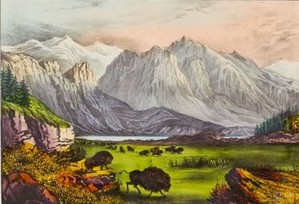 Imagining the Frontier: Landscape and Hunting Scenes of the American West

Fascination with the Western frontier had a major influence on American art in the 19th century. Currier & Ives mass produced images that witnessed the great drama of Westward expansion. This exhibition features 30 prints that depict the California gold rush, trappers and pioneers traveling to unknown territories, conflicts with Indians, buffalo hunting, fires on the prairie, the building of the transcontinental railroad and more.

The majority of the artists who worked for Currier & Ives never visited the Great Plains and had to rely on written accounts to create their designs. The result was that in some Currier & Ives prints, such as The Rocky Mountains, the buffalo look a bit like furry lions.

Images such as The Great West, with a steam train crossing a vast landscape, showed the expanse of the American frontier, a popular and saleable subject for Currier & Ives lithographs. The title helped to romanticize the idea of Westward expansion. Through the use of this imagery Currier & Ives promoted the natural beauty of the American landscape and expressed pride in the country’s expansion across the continent to the Pacific Ocean.

In many cases, the prints represented the winning of the West as a triumph not of the white man over the wilderness but over the Native American. Today historians often criticize Currier & Ives for the blend of fantasy and reality in their images of the West.