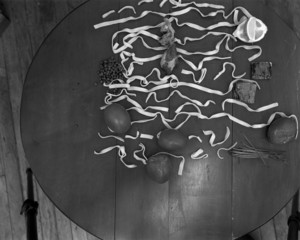 Inspired by traditional Dutch vanitas paintings, photographer Jessie Carleton creates and photographs still life compositions designed as reminders of the transient nature of life and the certainty of death.  Carleton uses common vanitas (vanity) symbols such as rotting fruit, decaying plants, smoke, bubbles, watches, hour glasses, etc., to convey the age-old message in a contemporary medium. Her work also expresses environmental concerns about food production, preservation, transportation and waste. She began the project by photographing food she had purchased but not consumed and which had begun to rot. The plastic bags, paper towels and store-bought food containers that appear in some of her photos are a reminder of our modern relationship to food and where it comes from.

Carleton is originally from Suffield, Connecticut, and is currently living and working in Stow, Massachusetts.