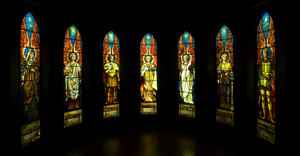 The stained glass windows of angels in this exhibition were created in 1902 for a Swedenborgian church in Cincinnati. The rare windows were displaced when the church was razed in 1964 for highway construction. The eight-foot-tall windows were crated and remained for almost 40 years in parishioners’ garages and basements. They were brought from Ohio to Pennsylvania in a U-Haul truck to a barn on a Swedenborgian church property in 1991. A new minister opened the unmarked crates in 2001.  The windows portray the angels of the early Christian churches of Asia Minor (in present-day Turkey). Each full-length angel holds a gift that God promised if the churches would reform their ways. Each angel has a slightly different stance and type of garment, lending individuality to a group united by their flame-like wings against the sky. Text panels introduce visitors to the historical background, the artistic qualities and the spiritual inspiration of the window series, which Tiffany named “Angels Representing Seven Churches.”

The exhibition is organized by In Company with Angels, Inc.