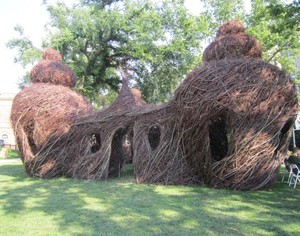 Room by Room: An Original Sculpture by Patrick Dougherty

Michele & Donald D’Amour Museum of Fine Arts, Outside on the Quadrangle Green

In June 2012, the Springfield Museums commissioned artist Patrick Dougherty to create this remarkable Stickwork sculpture. Using saplings collected by museum staff and volunteers from managed forestry and wildlife areas in Massachusetts, Patrick and his volunteers carefully wove together this installation.

In addition to being a remarkable work of art, this sculpture has benefitted the environment. It is made of nearly eight tons of saplings taken from the Smith Vocational Demonstration Forest in Leeds and from the Phillipston Wildlife Management Area in Phillipston, MA. The removal of mostly pin cherry and black birch saplings released young hardwoods and pine trees below and improved these natural habitats for wildlife.

Combining his carpentry skills with his love of nature, Dougherty began using primitive building techniques and experimenting with tree saplings as construction material. Starting in 1980 with small works fashioned in his backyard, he quickly moved to monumental installations requiring truckloads of sticks. To date he has built more than 230 of these massive sculptures all over the world, none larger than this one.

Special thanks to our partners: Massachusetts Division of Fisheries and Wildlife (MassWildlife) and Smith Vocational and Agricultural High School.