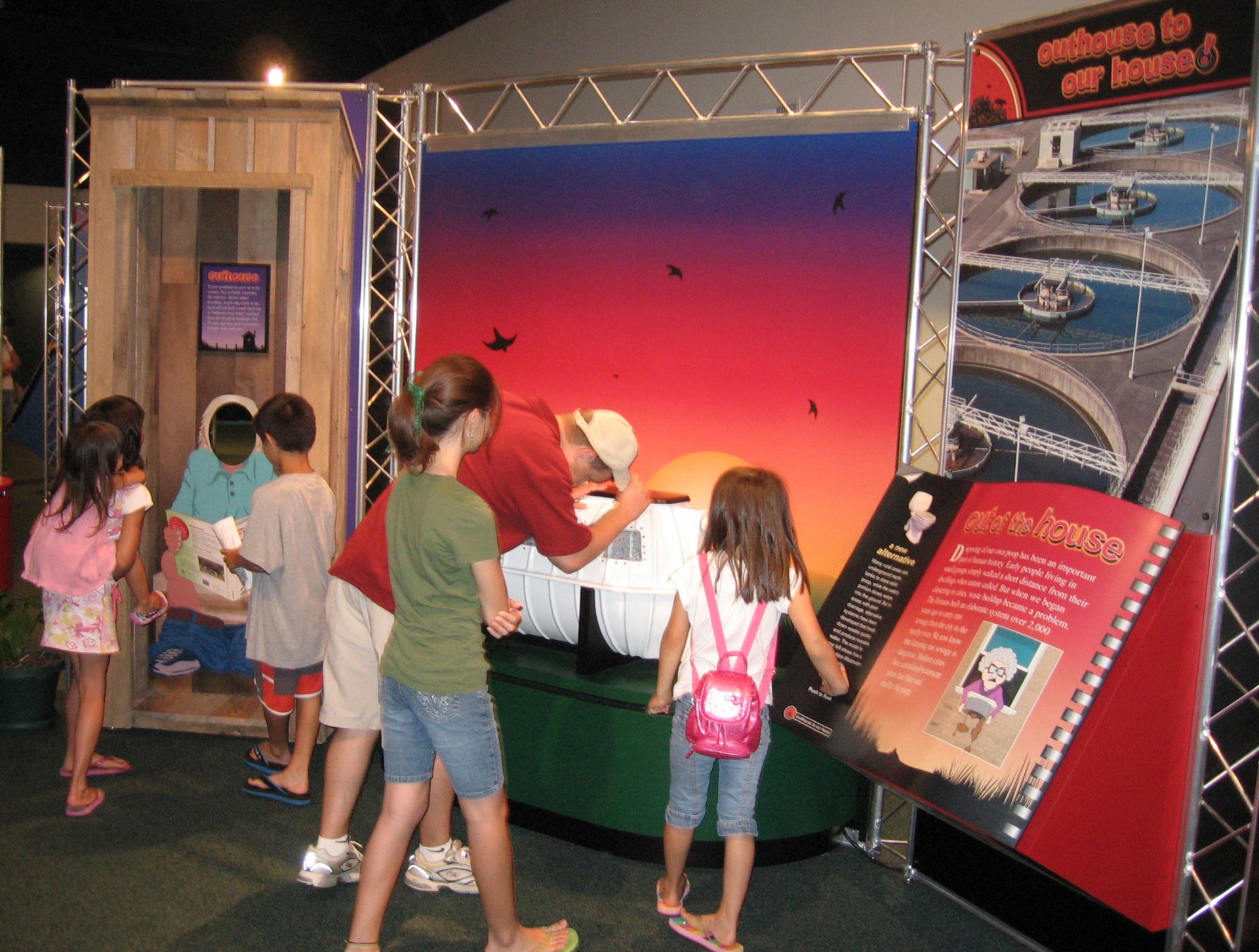 The Scoop on Poop: The Science of What Animals Leave Behind

Fish do it, frogs do it, pythons, eagles, and elephants do it, yet “poop” is one of those subjects we find difficult to talk about with a straight face. Kids, however, are positively fascinated by it, which provides an excellent opportunity for learning and exploration.

Based on the award-winning book by Dr. Wayne Lynch, The Scoop on Poop is a tactful blend of fascinating science and good clean fun. Visitors can find out how animals use poop to build homes, hide from enemies, attract mates, cool off, and even send messages. The exhibit also explores how people from veterinarians and paleontologists to Maasai tribesmen and power companies utilize animal waste. Excrement is also a scientific detective puzzle since much can be learned about an animal from what it leaves behind.

The Scoop on Poop features fun interactive components, three-dimensional models, and large colorful graphic panels all appropriate for ages 5 and up. The 15 interactive stations allow visitors to listen in on a bear’s digestive system, learn how veterinarians make a diagnosis from fecal samples, compete in dung beetle races, track wild animals by clues left in scat, and investigate coprolites (fossilized dinosaur dung). There’s plenty of amazing trivia to be discovered as well – the world’s most expensive coffee beans are those that have passed through Asian civet cats, for example, and that the Aztecs valued guano fertilizer so highly that they threatened to execute anyone that tried to steal it.

The Scoop on Poop also traces the progression of plumbing technology, from modern filtration systems back to the days of the not-so-luxurious accommodation – the outhouse.  Included in the exhibit are several live animals including a box turtle, mice, and other living organisms that make continued “contributions” to the exhibition’s contents.

Is there DNA in poop?

Do sloths really poop once a week?

Yes, sloths live in cecropia trees and sleep 15 hours per day. Once a week or so, they climb down to the ground, dig a hole, and carefully bury their droppings.

How much do elephants poop?

Elephants eat tough, fibrous foods and most of it passes through their bodies undigested. An adult African elephant can produce up to 300 pounds of dung each day!

How do animals communicate with poop?

Elephants eat tough, fibrous foods and most of it passes through their bodies undigested. An adult African elephant can produce up to 300 pounds of dung each day!

How many kinds of dung beetles are there?

There are over 7,000 species of dung beetles and they’re found on every continent except Antarctica. Look around next time you’re in the woods – most parts of the United States have native dung beetles.

Why do doctors and veterinarians look at poop?

Feces is full of clues about what’s going on inside an animal. It can reveal what an animal has been eating, how well it’s digesting its food, and whether there are parasites or other signs of disease.

Yes, many diseases can be spread through the digestive tract and people often get sick eating tiny bits of feces in contaminated food or water. Outbreaks of cholera have killed hundreds of thousands of people worldwide.

Who cleaned up the big messes left by dinosaurs?

Paleontologists have found dung beetle burrows in fossilized dinosaur poop. They must have had an enormous feast!

Ever heard of a turd tossing contest?

Believe it or not, cow-pie tossing contests are popular events in parts of Oklahoma and Wisconsin. The record distance for a flying cow chip is over 185 feet – more than half the length of a football field!

Why do trees make fruit?

The answer is all about poop. When an animal eats a piece of fruit, it often swallows seeds which pass through the intestine unharmed. Every time a fruit-eater poops, it drops off seeds in a nutritious bundle of fertilizer and “plants” the next generation of trees.

The accumulated droppings of Peruvian sea birds, called guano, have been used to enrich farm lands for at least 500 years. The supercharged fertilizer was so valuable, that the Inca Empire guarded it and punished trespassers with death.

Good to the last dropping...

A company in Indonesia makes gourmet coffee by collecting beans from the droppings of the palm civet. The coffee is said to have a rich, “musty” taste and sells for $175 per pound.

$5 for all visitors ages 3 and up in addition to museum admission.