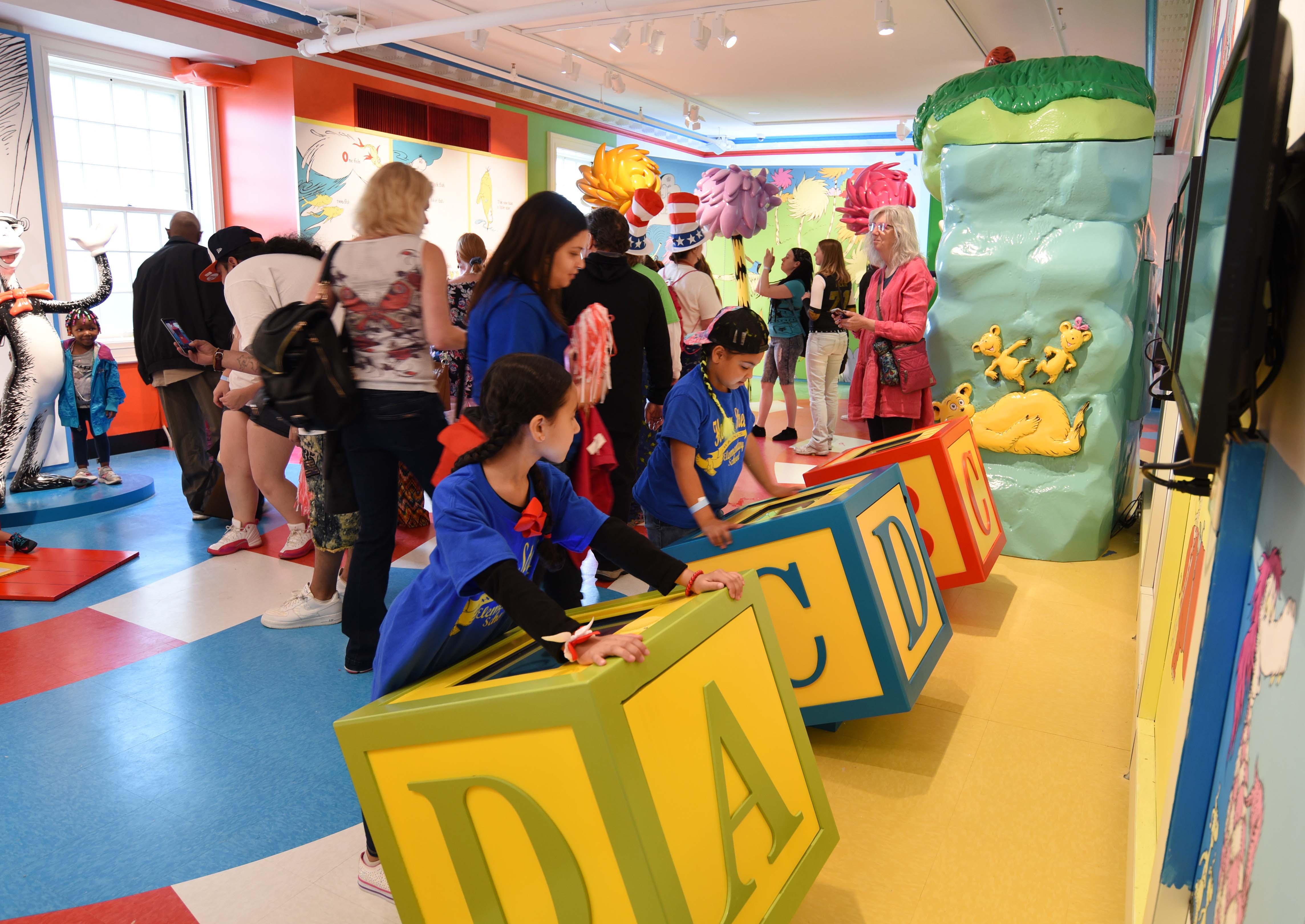 The Amazing World of Dr. Seuss Museum Opens Amidst Fanfare and Fans

On Saturday, June 3, 9 am, the giant Cat in the Hat Balloon and a wonderful Cavalcade of Conveyances paraded down the famed Mulberry Street to kick off the grand opening day for the Amazing World of Dr. Seuss Museum with fanfare. Parade dignitaries included Lt. Governor Karyn Polito and Mayor Sarno. The parade participants flowed onto the quad to enjoy performances by the SHOW Circus of Easthampton, MA, and students from the Community Music School of Springfield.

The Amazing World of Dr. Seuss Museum officially opened at 10 am as the Cat in the Hat himself threw open the door and beckoned the crowd to join him in his new home, a museum dedicated to the Springfield native and Cat in the Hat creator, Theodor Geisel, aka Dr. Seuss. And was there a crowd? Yes, there was—3,000 strong!

A regular Saturday will attract a fraction of that number, said Welcome Center Supervisor Sharon Ferrara. “It was a very good and very busy day.”  Ferrara’s staff worked nonstop to help all secure tickets. Although many were able to get into the new museum, others chose to come back again when the crowds would be less in the new museum. Instead they enjoyed the many other fun programs throughout the museums of the quadrangle planned by the Springfield Museums’ education and family programming team.

Tickets for the Dr. Seuss Museum sold out by 3 pm and 1,800 people walked in the doors curious and walked out hours later with grins on their faces. (The Springfield Museums used timed tickets to help manage numbers entering the museum and make sure there was plenty of room for kids to play.)

We heard comments like: “I’m 66 years old, but I feel like I am 5 again!” Everyone had smiles on their faces as they left saying, “That was awesome!” or “That was great!” Many kids gave us the thumbs up when we asked if they had fun. One dad pointed to his son playing in the bakery meant to represent Ted Geisel’s grandparent’s bakery and said, “He doesn’t want to leave!” Self-proclaimed Seuss fanatics said how happy they were to see his personal items—such as his drawing desk and red rotary phone. That gives the museum even more depth they said. “There is lots of history, I love that,” said Efrain Bermeo of Wilbraham, who carried his one-year-old son.

Exiting the museum with his family, Ja-Quan Gray, 11, from East Springfield responded to the question, How did you like the museum, with a double thumbs up and a review: “Out of 10, I give this museum a 1,000!”

Climbing on the bright pink railings in front of the museum, Samson Oppenheim, 10, from Easthampton, was glad we preserved Ted Geisel’s stuffed toy dog, Theophrastus, “It was cute!” And Samson noted that Dr. Seuss used to always have a pet dog from the photographs he saw displayed in the Pet Shop exhibit.

The McElligot’s Pool exhibit caught the attention of Jacob Jackson, 8, of Northampton. “You can make your own fish!” he said with a laugh and a fist pump.

Many people responded to the abundance of murals recreated from Dr. Seuss books by John Simpson, Project and Artistic Director, and his team of assistants from the UMass Amherst Commonwealth College. Mayor Domenic Sarno said, “It’s like walking right into a Dr. Seuss book!” One mom approached Simpson with a child held by each hand. “What you did in there is magical,” she said. “Thank you.”

Two young women from Springfield were impressed by the impact their town had on Geisel. “I had no idea how much Springfield was part of Dr. Seuss,” said Anna Zenno. Her friend Sphoorti Umarjee, agreed and added, “It was nice to see our childhood memories recreated so beautifully.”

Charlie Castillo and Joanna Aveles also commented on how seeing all the murals and exhibits brought back wonderful childhood memories.

And now it is time to make new memories. Bermeo shifted his son on his knee while sitting outside the museum under a tree.  “I’m just starting with touch and texture for this guy right now.” Then with a huge smile he added, “My four year old though, he is still in there with his mom!”

The Amazing World of Dr. Seuss Museum was created with the gracious consent of Mrs. Audrey Geisel, the widow of Theodor S. Geisel, and Dr. Seuss Enterprises, L.P. Opening weekend festivities are sponsored by American International College, Geddes School Supplies and the TD Charitable Foundation. The MassMutual Foundation is the Season Supporter of the Springfield Museums.