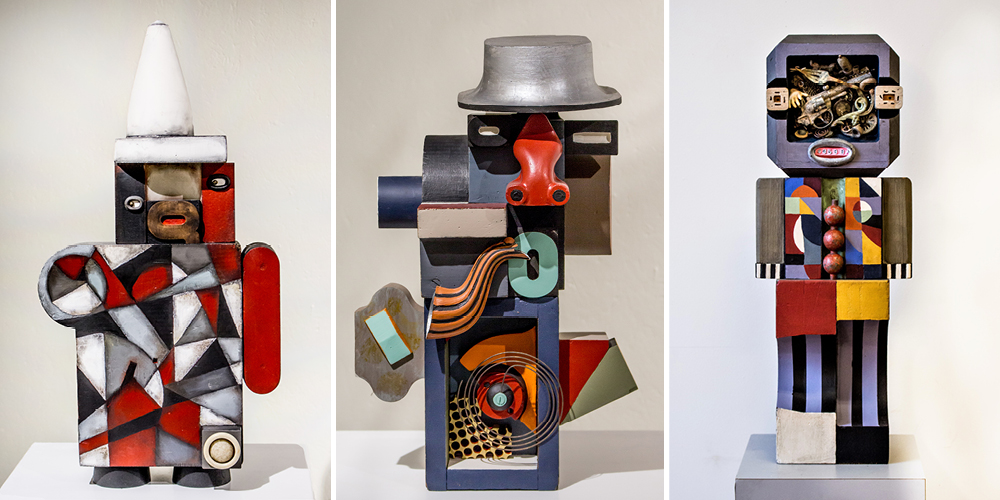 Chance Encounters Gives New Life to the “Trash of History”

Massachusetts artist Shawn Farley creates sculptural assemblages that give new life to obsolete foundry molds and other found objects. By embracing chance and trusting her keen artistic instincts, Farley constructs clever compositions that take on human qualities and adopt their own personalities.

To embark on her work, Farley searches flea markets and seeks out junk dealers from all over the country. She is particularly interested in wood patterns or molds formed by talented craftsmen long ago. Once used to make fittings for Hoover Dam ships or contribute to operations at a mill in Shelburne Falls, the foundry molds that are integral to Farley’s work served an important industrial purpose. These, she said, are unique pieces on their way to becoming the trash of history.

“These objects radiate personality and voice, demanding an opportunity at another life,” Farley said. Since foundry molds come in all shapes and sizes, it is often playing with them that dictates what they will become. Farley might have a piece nearly finished when by chance, she places another piece next to it rather than on it and it changes the entire direction and meaning of the piece. “I love when that happens as it offers a more inspired completion to the piece.”

While some of Farley’s constructions express personal views on social, political, and religious issues, others are purely automatic. “Freed from their destiny as castaways or trash, these objects assume new identities and an evocation of something soulful,” she said. “Perhaps they are emblems of our humanity.”

“The imaginative assemblage works in this exhibition make the old new again. The artist’s deep respect for her materials and her ability to re-invent them result in exciting and intriguing creations,” said Maggie North, Curator of Art at the Springfield Museums. “Each encounter with Shawn Farley’s work tells a story and offers an opportunity for dialogue. We’re so excited to share this display with our visitors!”