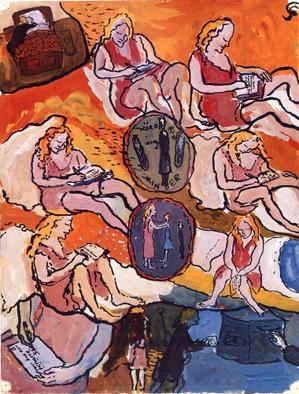 The Museum of Fine Arts will host a performance of With Dream Awakened Eyes, an original play about the life and work of a female Jewish artist in Nazi Germany, on Sunday, Oct. 22, at 2 p.m. The program is free with the price of museum admission.

Adapted by Ellen Kaplan, professor of acting and directing at Smith College, the play is based on Charlotte Salomon's "Life? or Theater?", which tells her story as an artist who fled Nazi Germany to seek refuge in the south of France. While living in France, Charlotte created a series of 800 autobiographical paintings about her life in pre-WWII Berlin which combine images and words in powerfully expressive compositions. Charlotte Salomon was born in 1917 in Berlin to a family of cultivated, highly assimilated German Jews. Her mother's family was destroyed by an epidemic of suicides, and Charlotte's mother killed herself when Charlotte was only seven years old. When Charlotte was 23, she learned the truth about the fate of her mother and her maternal relatives and realized that she was the only surviving member of her mother's family. Charlotte felt the same inclination toward despair and self-destruction, but found an outlet in her painting. In a letter written from her exile, Charlotte said that, through her painting and writing, "I was my mother, my grandmother, all the people in my play. I learned to walk all paths and became myself." She gave her paintings for safekeeping to a local physician active in the French Resistance. After the Nazis invaded France, Charlotte was sent to Auschwitz, where she died at the age of 26. During the play, actor Nicole Raphael will perform with a backdrop of projected images from Charlotte's paintings as well as musical accompaniment. The performance of With Dream Awakened Eyes is funded in part by the Harold Grinspoon Foundation.