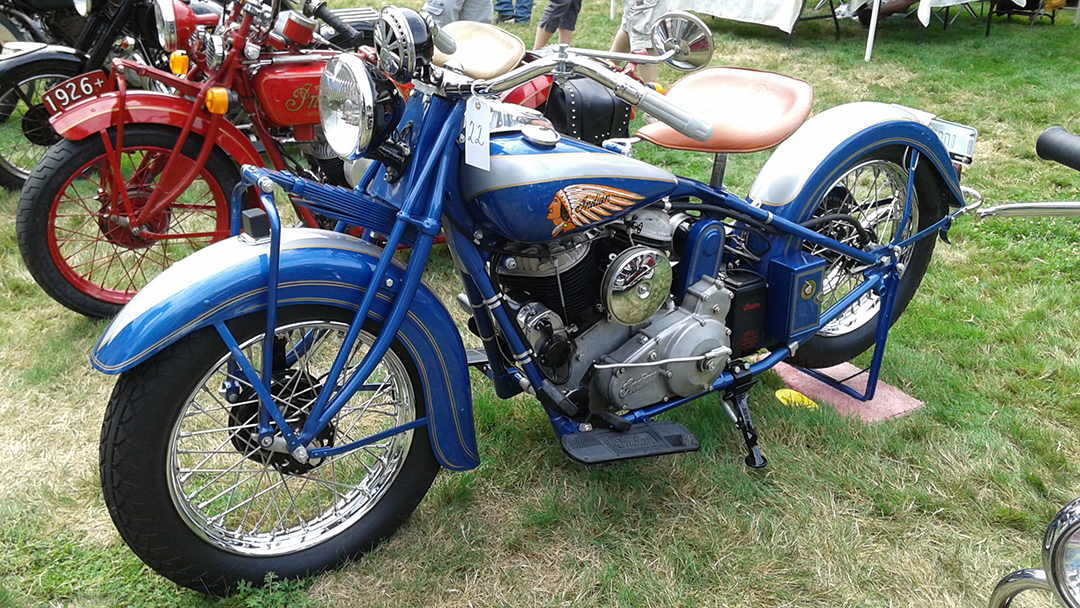 Join the Springfield Museums to celebrate the 10th Annual Indian Motocycle Day, Sunday, July 28, 2019, 9 am–3 pm, and take the opportunity to experience a tour led by one of the Indian Motocycle founders George Hendee (portrayed by docent Bobby Girard).

View the collection in the air-conditioned Wood Museum of Springfield History, including the exhibit Charles Manthos and His Indian Prototype.

All ticketed Indian Motocycle Day guests are also eligible for admittance to the history museum where they can view the Indian Motocyle Collection. Among the rarest Indians on view is the single cylinder Indian designed and owned by Indian co-founder Oscar Hedstrom. When he left the company, he took this motorcycle with him, and it was later passed on to his daughter. Also featured are Indian racer and dealer Stanley Cornell’s unique 1912 board track cycle with its original shipping crate; an entirely restored, operable 1929 101 Scout; and a 1927 hill-climber.

The collection also includes artifacts, memorabilia, and photographs highlighting production of Indian’s civilian and military motorcycles from the early years at the famous Wigwam through the final days of the company in 1953.

Visitors can also see Charles Manthos and his Prototype Indian Motocycle. The late Charlie Manthos, a professional metallurgist and ardent Indian Motocycle collector, had an entrepreneurial vision of bringing a new, locally manufactured Indian Motocycle back into production. Working with two former Indian employees, Earl “Pop” Armstrong and design engineer Jimmie Hill, he created a prototype based on the 1953 Indian Chief, the last of the original Indian production line. He hoped to take it to market in 1975 but his dream was never realized.

Indian Motocycle Day: $10 for adults,$5 for children ages 3-17. Free with paid admission to the Springfield Museums. The fee also includes admission also to the Wood Museum of Springfield History.

Anyone bringing a pre-1953 Indian for exhibition will receive one free adult admission plus a commemorative Indian Day button.

An Indian Comes Home
Andy Donald and his 1948 Indian Chief

Andrew Donald (1948-2018), an architectural draftsman for the non-profit preservation commission, English Heritage, purchased a 1948 Indian Chief from Chicago in 1987 and had it shipped to his home in London, England. The Chief was in poor condition and over the next two years he fully restored it. For the next thirty years, Andy rode his Indian Chief to many motorcycle events in Britain and on the continent. For Andy, in his own words, “it was the ultimate motorcycle.”

After retiring in 2012, Andy moved to his family home in Exeter, and became the editor of Indian File, the magazine of the Indian Motocycle Club of Great Britain. He contacted the Wood Museum later that year in search of information and photographs from the Indian Motocycle archives donated in 2007 by Esta Manthos. Over the next six years, Curator of Library & Archives Maggie Humberston corresponded with Andy Donald, and the two became friends as she responded to his requests for all things Indian. Andy was a skilled and thorough researcher who wrote some excellent articles about the history of Indian Motocycle, which appeared in the Club’s magazine.

Donald passed away in July 2018. The Springfield Museums were subsequently contacted by the executor of his estate with the news that Donald’s beloved 1948 Indian Chief would be gifted to the Wood Museum of Springfield History.

MassMutual is the Season Supporter of the Springfield Museums.