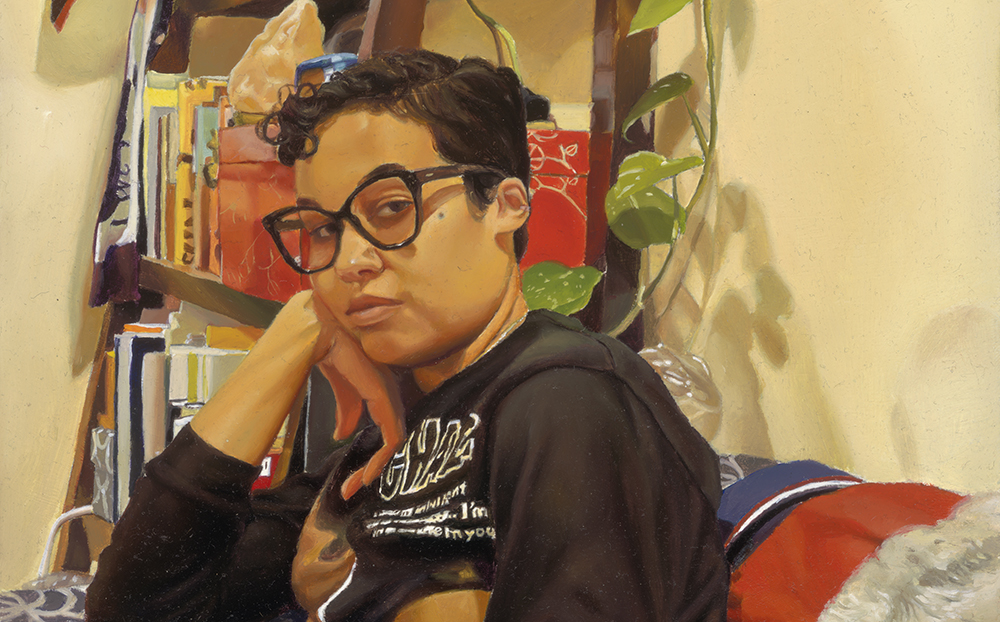 The Springfield Museums are delighted to present The Outwin: American Portraiture Today at the D’Amour Museum of Fine Arts October 3, 2020, through April 4, 2021.

“The Outwin has gained a reputation for spotting the best of the best in American portraiture,” said Kay Simpson, President and CEO of the Springfield Museums. “We are delighted to offer this important exhibition to our visitors. And we are excited to also feature regional portraiture in our Community Gallery.”

The Outwin: American Portraiture Today a major exhibition from the Smithsonian’s National Portrait Gallery featuring the finalists of its fifth triennial Outwin Boochever Portrait Competition.  Every three years, artists living and working in the United States are invited to submit one of their recent portraits to a panel of experts chosen by the Portrait Gallery. In 2019, nearly 50 works were selected from over 2,600 entries in a variety of media, including painting, drawing, sculpture, photography, time-based media and performance art.  The resulting presentation reflects the compelling and diverse approaches that today’s artists are using to tell the American story through portraiture. Finalists have come from 14 states, Washington, D.C., and Puerto Rico.

“The Outwin: American Portraiture Today features intimate depictions of individuals whose remarkable stories are rooted in the most pressing challenges of our time,” said Kim Sajet, director of the National Portrait Gallery. “Many of the leading national conversations from the past three years—immigration, the rights of workers, climate change and the impact of racial violence—are presented here on a personal level. It is a moment to stop, look around and admire the tenacity and beauty of the American spirit through portraiture.”

The latest edition of The Outwin addresses themes of socio-political relevance, including immigration, Black Lives Matter, adolescence, the status of American workers, gun violence and LGBTQ+ rights. Included in the exhibition is the work of the competition’s first-prize winner Hugo Crosthwaite, a resident of San Diego, and the first Latinx artist to receive this prestigious award since the national competition was founded in 2006. His prize-winning stop-motion drawing animation, “A Portrait of Berenice Sarmiento Chávez” (2018), recounts a woman’s journey from Tijuana, Mexico, to the United States in pursuit of the American dream. He received a cash award of $25,000 and a commission to create a portrait of a living individual for the Portrait Gallery’s permanent collection. Previous first-prize winners are David Lenz (2006), Dave Woody (2009), Bo Gehring (2013) and Amy Sherald (2016).

Second prize was awarded to Sam Comen of Los Angeles, who submitted the photograph “Jesus Sera, Dishwasher” (2018). Third prize, a tie, was awarded to both Richard Greene of Los Angeles for his photograph “Monroe, LA” (2016) and Wayde McIntosh of Brooklyn, New York, for his painting “Legacy” (2017). This year’s commended artists are Natalia García Clark of Los Angeles and Mexico City for her video “Self-Portrait” (2017); Lauren Hare of Portland, Oregon, for her photograph “Secrets” (2017); and Adrian Octavius Walker of Oakland, California, for his photograph “Black Virgin Mary” (2018). ADÁL was voted the winner of the Portrait Gallery’s People’s Choice Award for his compelling photograph “Muerto Rico” (2017), making him the second Latinx artist to receive this award.

The jurors for the 2019 Competition were Harry Gamboa Jr., artist, writer and co-director of the program in photography and media at the California Institute of the Arts; Lauren Haynes, curator of contemporary art at the Crystal Bridges Museum of American Art; Byron Kim, artist and senior critic at the Yale School of Art; and Jefferson Pinder, artist and professor of sculpture and contemporary practices at the School of the Art Institute of Chicago. Three Portrait Gallery curators also served on the committee: Taína Caragol, curator of painting and sculpture and Latino art and history; Dorothy Moss, curator of painting and sculpture and performance art; and Brandon Brame Fortune, chief curator emerita.

Moss was the director of the 2019 Outwin Boochever Portrait Competition and co-curated the exhibition “The Outwin: American Portraiture Today” with Caragol.

“We are thrilled to display this celebrated and prestigious exhibition in Springfield and to present the many expressions of portraiture being pursued by artists today,” said Heather Haskell, Director of the Art Museums and Vice-President of the Springfield Museums. “From traditional oil paintings to inkjet prints, to wall sculpture made from polymer clay, the portrayals of identity are technically outstanding and often powerful, poignant and thought-provoking.”

The exhibition is accompanied by a fully illustrated catalogue, available at the Springfield Museums Store.